Yesterday, I went to Nanette and Brent's birthday party. What a fun time! There, I met my friend Bree's husband Leif for the first time. They are such a beautiful couple, and, should they ever procreate, their children will be pretty, creative, and sweet. It's always neat to meet your friends' significant others and find them to be good matches!

Another good match is Trish and her fiance Spyro. I'd met Spyro before, but this was the first time I had the chance to interact with him extensively. He's very funny and clever, just like Trish! Obviously, I think the hosts of honor, Nanette and Brent, are lovely together, too -- Brent is the perfect foil for Nanette's exuberance, which is not to say that Brent doesn't dole out zingers of his own, but he's just a quieter force to be reckoned with. Like I said, perfect for Nanette.

Of course, I was also delighted to see my friend Winnie, as she and I were both flying solo for the night. Winnie's hubby is across the country for several months, and Mr. Monkey is currently in the Midwest for work. It was very nice to have a spouse-less friend there! 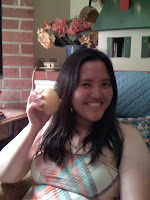 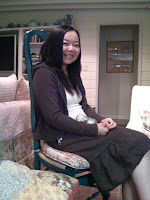 The party was held at the home of Brent's parents, who are delightful people. Brent's mom is a former teacher, and Brent's dad is a retired judge who continues to arbitrate cases. Trish and I discovered the educational and legal worlds are both very small. Add to this the fact that Brent's dad is a die-hard UCLA alumnus (as are Trish and Spyro), and we had lots to discuss. We had a great time chatting about different theories about the LAUSD -- including the "Dance of the Lemons" (see illustrative photo above) -- and shared many laughs. Nanette is lucky to have such wonderful in-laws!

While I've been very good about my new No White Rice, No White Bread, No White Pasta, No Fried Foods Diet, I splurged a little at Nanette and Brent's party. I didn't eat any bread or chips at the party, but I did have a yummy slice of this ice cream treat that looked like a watermelon! 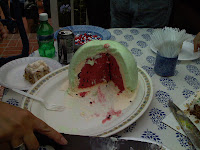 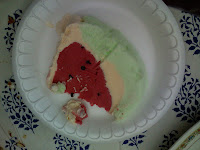 Today, I tried some organic brown rice sushi from the new Ralphs Fresh Fare. My small box lunch included one salmon, one tuna, one shrimp, one unagi, and three pieces of a California roll. It wasn't nearly as good as the real thing, but it hit the spot well enough and enabled me to stick to my diet. 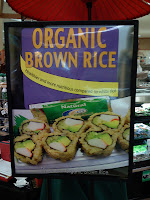 After chowing on my fake sushi, I went to work for awhile to revise a motion for a protective order. Then my brother picked me up for dinner with our mom. His girlfriend is currently on tour in South Dakota, so he was significant other-less, as well. I successfully avoided white rice, despite eating at a Taiwanese restaurant, and my mom was proud of my portion control. Amazingly, I've lost four pounds in only a few days. It's pretty crazy. I hope I can keep this up.
Bananas Unpeeled by weezermonkey at 11:28 PM