Some of you may recall that my awesome assistant was laid off back in July, much to my surprise and sadness. I'm happy to report that, not only did Whiz receive a handsome severance package, but she landed on her feet and is gainfully employed.

A more accurate description would be that Whiz nailed an incredible gymnastics landing in the Olympics, and even the mean German judge gave her a perfect score. Translation: Whiz is now working at a nicer place that pays her boatloads more, and she did it really quickly and long before she even made a dent in her severance! (Don't ask me why I felt the need to create a nonsensical analogy. It's the end of the workweek, and I'm delirious.)

I was thrilled when Whiz told me about her new job months ago. It was kind of a big Fuck You to our firm, which made a really stupid and terrible decision regarding Whiz. Go, Whiz!

Today, my current assistant Wheels and I met Whiz for lunch. Don't get me wrong. I love Wheels, too, but even he will attest that Whiz is truly a top-notch legal secretary...who is even better at the job than Wheels is. I've been blessed to work with such great people, who also happen to be friends with each other!

Wheels called in our order to Tacos Tumbras a Tomas at Grand Central Market, and Whiz picked up our food and met us at the Arco Plaza to eat together (we basically met halfway between our firms). I really shouldn't eat like this very often, and it's a good thing I don't anymore, but my carnitas taco was so so so good. Juicy, rich, meaty, and dripping with greasy goodness (or badness, as the case may be). Here it is closed and open. There was so much meat that I could've made three or four tacos out it! 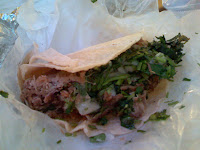 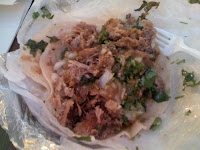 Whiz also got a taco, albeit carne asada. It was pretty similar, except that she had beef and I had pork. Wheels got a carnitas gordita. Wheels let me have one bite, and I was in love. The sope-like outside was deliciously fried and crisp and filled my mouth with oily happiness. Then again, it is called a "gordita," so I was glad I only had that one bite. I don't want to become a gordita, which is precisely what would happen if I ate like this regularly. 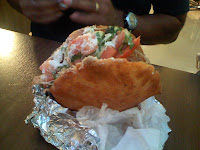 But all things in moderation. Good food in good amounts! And here's an iPhone montage of the three of us in different permutations. Whee! 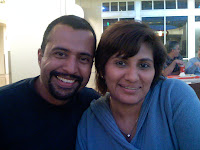 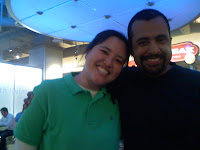 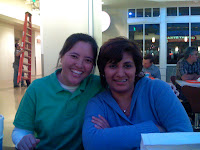 Bananas Unpeeled by weezermonkey at 11:19 PM

Email ThisBlogThis!Share to TwitterShare to FacebookShare to Pinterest
Labels: mexican