SMALL ANNOYANCE
I'm a very bad driver, and I know it. I'm an even worse parker. I acknowledge my shortcomings, though, and take all necessary precautions to prevent mishaps. For example, I use a handy dandy cinder block to let me know when to stop backing up, so I don't hit a metal vent in our garage. See Exhibit A below. 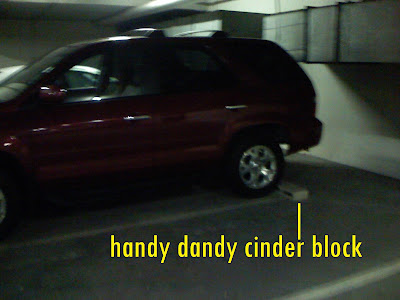 Well, lo and behold, I don't know what evil trickster moved the cinder block, but today I backed up and hadn't even reached the block when I ran into the metal vent that I'd been so careful to avoid for the past six years! Booooo! The block had been moved just far enough, so that, as my tire was about to touch it, the metal vent scratched my beautiful Big Red's rear window. [sobbing]

Ok, that was a little melodramatic. Truth be told, the scratch was minimal, and you can only see it if you really hunt hard. But, nonetheless, I was upset that this happened at all because I had gone to such lengths to avoid it. Bah!

BIG ANNOYANCE
Today we got an envelope from the IRS. The letter claims that the Monkeys still owe $9,359.74 in taxes. WTF?!?!?!?!?!?! We had already paid a boatload of taxes, and I looked at my bank account online to see what happened to that huge check I'd already sent. That big check had been cashed, damn it! I hate the IRS. I'm going to have quite the talk tomorrow. This can't possibly be right. Bah!
Bananas Unpeeled by weezermonkey at 8:32 PM