Aside from taking my car in for a scheduled service and stopping by the store to pick up a few things, today consisted mainly of food, food, and more food. An interesting observation -- ever since I started documenting my eating habits, I've lost weight, even despite eating out a lot. I think I've learned and mastered the great art of portion control. I have not plateaued, as I'd originally thought. I'm down yet another pound and am only three pounds away from wedding weight now. W00t w00t!

My dad picked me up around noon, and we headed to Brother Monkey's house in Hancock Park. We walked to Prado Restaurant on Larchmont. Prado is a cozy little Caribbean eatery with an interesting sense of eclectic design -- brightly colored plates and walls and purposefully mismatched chairs. Not really my style (especially the ceiling), yet it works. 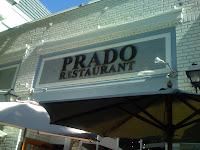 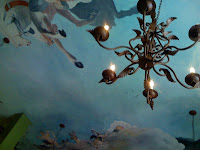 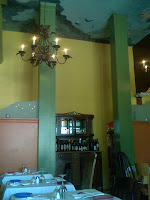 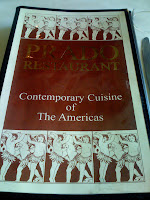 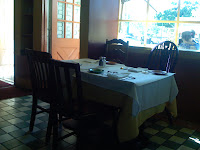 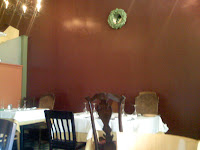 I enjoyed my Carribean Cobb Salad with grilled shrimp immensely. It sounds crazy, but it may have been one of my favorite salads ever. Well, at least in recent memory. The grilled shrimp and mixed greens were tossed in a light vinaigrette with two lovely pieces of brie cheese, apples, grains, nuts, tomatoes, squash, zucchini, and a number of other vegetables (the menu boasts that the salad has 20 ingredients). So often, salads are disappointing. Not this one. Loved it, loved it, loved it. I shared a good bit of my salad delight with my dad and brother, who agreed it was pretty awesome indeed. My dad also proudly noticed when I shoved every single crouton in a pile on the side. Ok, I confess -- I ate one. Just one! 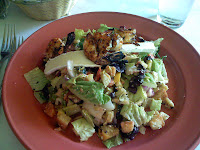 My dad ordered the Citrus Salad, which had the same grilled shrimp as my salad, plus mixed lettuce, grapefruit, oranges, avocado, and citrus vinaigrette. I had a bite, and it was tasty, too, but not as good as my salad. 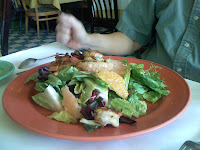 Brother Monkey gorged on the Prado Sampler, a collection of shrimp in black pepper sauce, crab cake, a chile relleno, and a Jamaican tamale. I had a small bite of the crab cake and tamale. Yum! The crab cake was totally real crab with very little breadcrumb filler. The tamale was moist, well-seasoned, and well-sauced Still, I'm surprised to say this, but I think my salad was even better! Yes, I'm officially in love with that salad. I will dream of that salad. 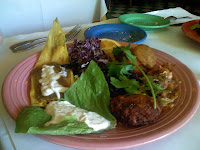 When my dad whipped out his wallet, my brother and I couldn't stop laughing because it was so thick! It was totally a George Costanza wallet! Compare my brother's wallet to my dad's. Maybe it's a reflection of net worth. Tee hee! 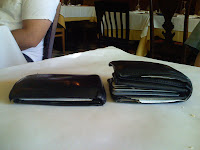 We didn't get dessert, but I snapped this while walking out. Tempting, eh? 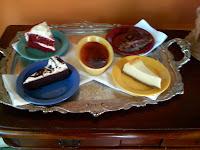 Tonight, we went to Gardens on Glendon in Westwood to celebrate with about 20 people the recent marriage of Mr. Monkey's boss. Gardens serves typical American food with a few quasi-ethnic offerings. The ambience is comfy and casual, and the place is good for groups. Check out the antler chandelier. Heh. 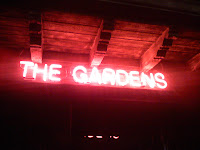 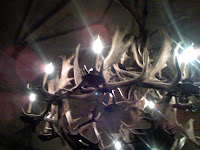 We started with cocktails and some marvelous guacamole and chips (sorry, no pics -- I didn't actually eat these, but Mr. Monkey and everybody else were totally raving about the guac). This was followed by tuna tartare with avocado on wonton crisps. The tuna didn't have the greatest texture or mouth feel, but it wasn't totally terrible. 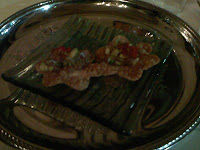 Mr. Monkey and I shared the Eastern Shore Lump Meat Crabcake appetizer and Pears and Stilton Cheese Salad with Sugared Walnuts. Not unlike Brother Monkey's crab cake at lunch, this crab cake was also excellent -- all meat, very little filler. The salad was pleasant, but it needed more sugared walnuts. I searched and searched and found only two. Shame on you, Gardens on Glendon. 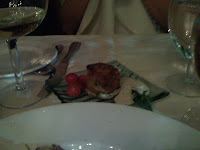 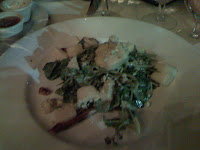 I ordered the petite filet mignon sandwich, while Mr. Monkey had the short ribs. As always, we switched midway. I ate half the sandwich, sans most of the bun, and about five shoestring fries. While my steak was fine, the short ribs were seriously delicious. They were a far cry from Daniel Boulud's short ribs, but they were easily the best dish of the night -- extremely tender. 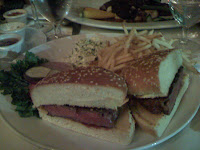 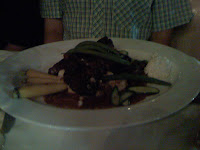 Having avoided eating to full capacity, I had more than ample room for dessert. We had the Fresh Berries and Fruit Triple Cream Sundae and the Warm Chocolatey Pecan Pie. As all desserts are, they were a sweet ending, but, while I wouldn't turn them down, they didn't exactly wow me. I only had a few bites. 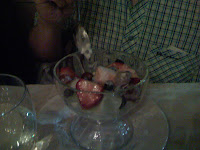 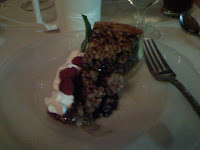 On our way out, Mr. Monkey pointed out that this Bentley was his boss' car. Whoa. Now that's a nice car! I was really glad that the boss was still inside when we were waiting for the valet, so I could take these photos without embarrassing myself too much. 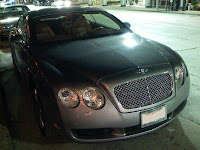 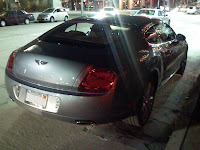 Seeing this car was an even sweeter ending than the run-of-the-mill desserts. Ah, me and my obsession with electronics and cars.
Bananas Unpeeled by weezermonkey at 11:10 PM