Cuban With Co-Workers and Day With Dad

First and foremost, thank you for all your kind words. They really mean a lot to me, and I sincerely appreciate the h+p, even though I always scoff at the ridiculousness of such things on message boards. Thank you from the bottom of my heart.

I've decided not to neglect what I'd originally wanted to talk about yesterday, so I'm going to start with a recap of the nice day I had (aside from the e-mail that was the subject of yesterday's post). Then I'll follow this with today's events. So, yes, this may be a bit long.

As I'd mentioned briefly yesterday, I had another enjoyable day at work, which is rare for me. I guess talking about my motion to dismiss wouldn't be that interesting, and trying to make you laugh with a description of e-mail shenanigans would be difficult. Thus, I'll just talk about lunch.

Cheeks, Bootcamper, Miz, T-West, Sassy, and I went to El Colmao (2328 W. Pico Blvd.) for great homestyle Cuban food for a great price. El Colmao rules. The portions are ample and the food made with love. The decor is...well...it's a hole in the wall, but who cares? You'll forget all about that after your first bite.

Bootcamper and I ordered what I almost always order at El Colmao -- bistec empanizado, which is steak pounded nice and thin and deliciously breaded and lightly fried. Mmm. It comes with beans and rice, as do all lunch specials. Miz and Cheeks gave their meals -- flash-fried baby back ribs and ropa vieja (i.e., shredded steak), respectively -- thumbs up. Sassy and T-West had the chuleta de puerca ahumada (smoked pork chop) and the chicken fajitas. Of course, we got fried plantains for the table. So freakin' good. Everything! 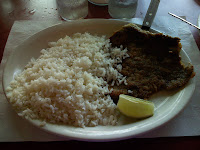 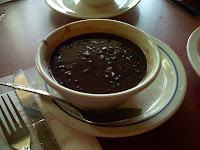 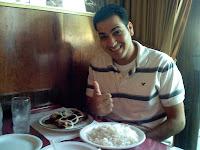 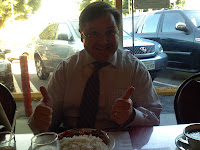 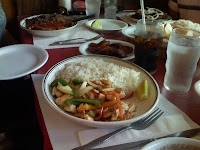 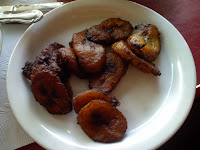 Today I had lunch with my dad and brother. It was a good lunch, both taste-wise and conversation-wise. I let my brother ask all the questions about my dad's tests. It was easier that way because my brother is a lot better at controlling his emotions than I am. I sat there, trying to absorb all of the information.

My dad's prostate-specific antigen (PSA) level was 7.26. A few years ago it was at 3ish, and a few years before that it was lower. While the 7.26 is troubling by itself, the increase over the years is perhaps more so. My dad said that he was a little perturbed that his doctor didn't note the steady increase, which is a red flag for possible prostate cancer. Even worse, when prostate cancer develops, the PSA level usually goes above 4. What the hell was my dad's doctor doing not saying anything at the last checkup?!

However, my dad also said there are a number of other reasons for an increased PSA level. It could be benign prostatic hyperplasia, which is a non-cancerous enlargement. It could be prostatitis, which is an inflammation of the gland. It could be a lot of things other than cancer.

My dad's transrectal ultrasound-guided biopsy is scheduled for November 9, so we'll be waiting for quite awhile before we find out what this 7.26 means. The waiting! Torture.

I felt much better today seeing my dad, though. He's definitely aged over the years, but he seems pretty healthy and is in good spirits. His good spirits put me in good spirits. Maybe he's putting on a brave front for us, but, if he is, it worked. 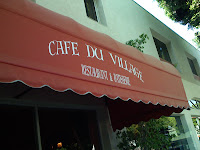 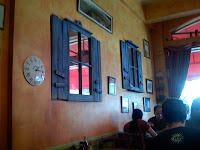 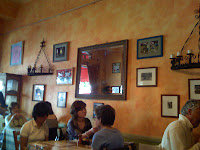 Usually, I get a sandwich or an omelet, but I chose the duck salad today. Amazing. And...it had mushrooms. Ah, Kate, you may be right yet. The duck was tender and plentiful and the mushrooms surprisingly tasty, almost smoky and even a bit crispy on the edges. 'Twas a damn good salad. My dad got a vegetarian quesadilla (also surprisingly good at a French cafe). My brother had an old fave of mine, the provencal sandwich. 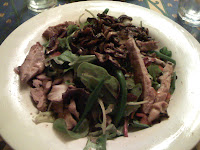 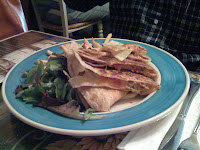 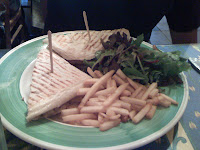 We chatted about lots of non-cancer things. My brother gave us his thoughts on the Writers Guild strike. I talked about my career goals. I also noted that James Remar was sitting less than five feet away from us. When I told my brother this, an inquisitive woman next to us leaned over and asked, "Who is that?" I explained, "He played Richard, a guy Samantha dated on Sex and the City, and now he's on Jericho." The woman was way excited. Her companion just rolled his eyes.

After lunch, we walked back to my brother's house, and my dad drove me back to my condo. He asked if I was doing anything. I said no, so we went for post-lunch coffee at The Coffee Bean. Then he suggested that we go look at lofts for fun. What a great idea!

We checked out the Market Lofts on top of the Ralphs Fresh Fare. They were kind of neat, but we weren't really that impressed. The quality of some of the materials wasn't really that great, and the floorplans left a bit to be desired. If you're interested, I took a pic of the price listing that my dad took home with him. Hee. 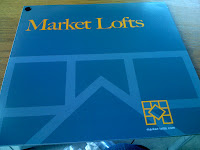 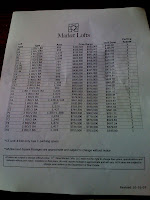 It was really nice to spend time with my dad. Most of my life, we haven't seen eye-to-eye on a lot of things, but recently we've gotten closer. I don't know why, but my wedding really brought us together. My dad even cried when he danced with me, and he, like my brother, rarely shows any emotion.

This afternoon made me happy. I think it made my dad happy, too.
Bananas Unpeeled by weezermonkey at 11:33 PM