It's memetag time yet again. Last time, it was seven random facts about me a la Nanette. This time, the wonderfully cheery and talented Crissy Farah has tagged me for eight facts, after which I am to tag another eight peeps. 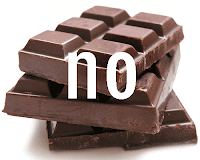 (1) I am allergic to chocolate. It's not the horrible anaphylactic shock kind of allergy. I won't die from eating chocolate. If, however, I eat too much chocolate, I get hives all over my arms and face, and it's amazing how quickly the hives appear. Notwithstanding the hives, I still eat chocolate occasionally. A little itching is worth a morsel of sweetness. Sometimes.

(2) I lost 15 pounds last year before our wedding. In just five months after the wedding, I expanded exponentially -- 23 pounds! Yikes! Since January, I've dabbled with exercise and have modified my eating habits. I've lost 14 pounds, and I didn't gain any weight during the Monkeys' most recent getaway! Through moderation, I've been able to shed the pounds slowly and without going crazy. Just nine more pounds, and I'll be back to wedding weight!

(3) Pragmatism always wins over spontaneity or fun in my world. Sad but true. I had lunch with an old co-worker recently, and we agreed that I should be doing (and would be happier doing) something more creative with my life. Then what did I do? I walked back to my office as if the conversation had never happened and continued doing the same boring work I do every day. Why? It's safe.

(4) I own over $10,000 worth of Paul Frank paraphernalia. This has been accrued over the span of about eight years when my obsession first began. I have an inordinate number of t-shirts, hoodies, pajamas, underwear, watches, shoes, and bags. Among other things, I also have a bike, three skateboards, keychains, coasters, sheets, pillows, plush dolls, wallets, sunglasses, umbrellas, pitcher and tumbler sets, mugs, posters, stickers, wristbands, buttons, and even a collector Barbie. Actually, $10,000 is probably a low estimate, as I last took inventory in 2004.

(5) I don't like talking to strangers. I guess I was trained well as a child. I hate it when people on airplanes talk to me. I hate riding in elevators with people I don't know. I hate it so much that I actually get in the elevator and press "close door" maniacally and repeatedly. The Monkey is a total misanthrope! Sadly, I have the type of look that seems to invite random conversation. I guess I seem friendly. Oh, little do these strangers know!

(6) I played varsity badminton in high school. Hey, it's an Olympic sport! No, it's ok. You should go ahead and laugh. I had and continue to have zero coordination and athletic ability. So how did I make varsity? Two reasons: (1) I was ever so slightly less sucky than my other nerdy counterparts who also couldn't make the tennis team (the average GPA of the badminton team was above 4.0), and (2) my doubles partner was actually really good. I basically stood on the court to make it a doubles team. I would mainly just stand at the net, holding up my racket and ducking every so often when my partner would smash the birdie. Needless to say, I never got a jacket to show off my letter emblazoned with a shuttlecock. I was geeky enough without the extra fodder for ridicule.

(7) I shower twice a day and sometimes more, depending on whether and when I exercise. I know this is bad for my skin, but I just can't help it. I can't go to bed without being totally clean. It grosses me out to think of nestling in my nice-smelling clean sheets sans a proper sudsing. And then my hair is a mess in the morning when I wake up, so I have to hop in the shower again.

Email ThisBlogThis!Share to TwitterShare to FacebookShare to Pinterest
Labels: blogging