Today I Didn't Even Have to Use My AK

I gotta say it was a good day.

Like Ice Cube, get me on the court, and I'm trouble. Ok. I guess in court is more accurate. I can't play basketball to save my life.

The day started at the buttcrack of dawn. It took me 2.5 hours to get to San Diego this morning, which wasn't actually that terrible, in light of having to sit through a good bit of traffic. I was so tired, though, that I actually started nodding off at the wheel. Way dangerous.

Much to my dismay, my car seemed to have only wussy sleepy CDs -- Death Cab, Dashboard, Snow Patrol. ARGH. If I were a passenger, these would've been great. Not so as a drowsy driver. I had to rummage a bit before I found Muse's Absolution, which saved me from literally crashing and burning. In an effort to stay awake, I sang at the top of my lungs to the entire album. Twice.

I got to court about an hour earlier than my hearing time -- you can never be too careful about these things. I parked in the only public lot I could find after circling a few times. I tried, my dear client, I tried. Alas, I had no choice but to park here. Sorry. 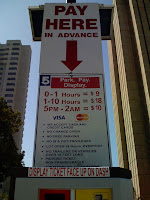 This was my first time appearing in the Southern District of California Bankruptcy Court. I've never had to trek all the way down there for work. 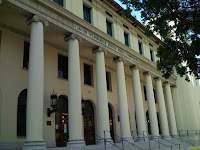 The security guard was sort of jerk and was not at all helpful when I asked him where I could find some much needed coffee. (S.D. Cal. Bankr. apparently doesn't believe in cafeterias.) I left the courthouse in search of caffeine and ended up with this. 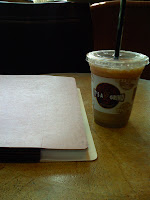 After downing my iced latte and reviewing my papers one last time, I returned to court. It was old school all the way. The elevator was functional, albeit probably older than my grandmother. I opted for the stairs. 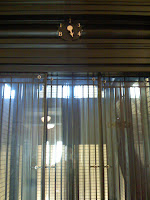 The courtroom was stately and reminded me of Riverside Superior Court. I loved it. It made me think of sweaty Matthew McConaughey in A Time to Kill...with air conditioning and modern technology. Note the flatscreen on defendant's counsel's table. 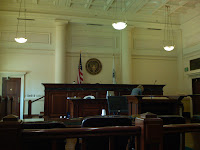 Our matter was called third. The judge looked like a distinguished erudite version of Orville Redenbacher. Plaintiff's counsel and I stated our appearances, and then the judge said, "Proceed."

This was new to me. In all my years of practice, I've been accustomed to getting a tentative opinion the day before, the morning of, or at least some sort of oral indication from the judge as to which way he was leaning. I'd never had to start arguing cold. Well, live and learn. Since I'd brought the motion, I argued first. The judge peppered me with questions, as was expected. I fielded them with confidence.

Then opposing counsel had his shot. I wasn't impressed. After his argument, I had one more chance to rebut, which I thought I did well. The judge thought so, too, and granted my motion. It's always fun to win. And it's even more fun to beat a man who has practiced twice as long as I have. Bwahahahaha.

High on my victory, I drove home. What a looooong drive. 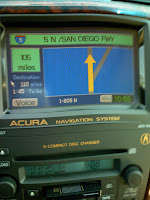 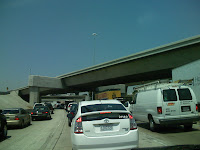 When I got back to the office, the partner, senior counsel, and client thanked me for my hard work. That felt wonderful. As my friend once said, we are praise whores. I live for praise, and praise is hard to come by at work. A little goes such a long way.

A few hours later, I got an e-mail from another partner who had appeared at a hearing in Chicago this morning. The judge granted a motion that I had written and filed in the Northern District of Illinois. This was amazing news to me, as I had expected to lose that motion, which asked for a protective order to preclude the deposition of a high-ranking executive. The partner congratulated and thanked me, which, again, felt wonderful.

It's not often that you get two wins in a day. It's even rarer that your efforts are recognized.

Today was a good day.
Bananas Unpeeled by weezermonkey at 9:47 PM