I am worn out, and the weekend's just begun. I don't know how I'm going to get through it all, since we still have more fun and festivities to come. I haven't slept much this week, and I think I got a bout of food poisoning or some kind of ailment that has taken a toll on my intestinal tract. I planned to go into work today to finish up yet another motion (the partner asked me to "work [my] magic" -- his words, not mine), but I decided to stay home because I'd rather use my own toilet on this frequent a basis. I am *this* close to using the Boudreaux's Butt Paste I got at Jenny's baby shower. That's how bad it is. TMI, TMI, TMI. Yes, folks, I know this is why you visit me.

Last night, the Monkeys went to the Dodger game with Brother Monkey and his roommate. It was Tommy Lasorda bobblehead night, and there was free cake for all in celebration of his 80th birthday. Here's Brother Monkey's slice. I didn't have cake. Or garlic fries. Or ice cream. Or cotton candy. Oh, the willpower! I did eat part of an Italian sausage sans bun, though. Yum. Or not. I suspect that it was either this sausage or the steak salad I had at Morton's for lunch yesterday that made me feel like shit today. I think it was Morton's, though. I'd felt a little queasy after lunch, although the poocano symptoms didn't start until today. 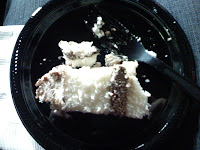 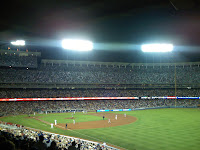 We left the Dodger game early to go to the Wiltern Theater to see The Bravery. Here's a tip -- call the venue to ask when the headliner will actually take the stage, so you don't need to sit through crappy opening bands. Doors opened at 7, and the show started at 8, but the nice lady at the Wiltern informed me that The Bravery wouldn't go on until 10:30. This works at bigger venues, too! Try it! 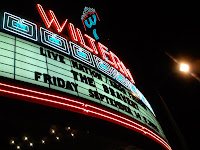 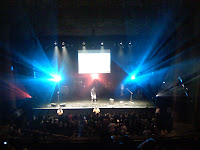 I love seeing shows at The Wiltern. There really isn't a bad seat in the house, and the art deco ceiling is amazing. 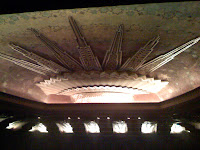 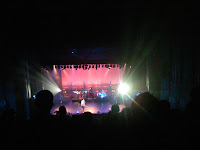 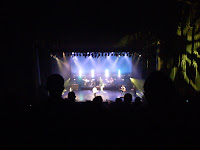 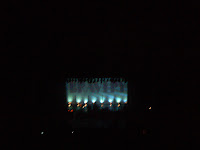 The Bravery played a good show -- not great -- but it was an enjoyable set. I really like The Sun and the Moon. It's one of those rare occasions that a band's sophomore effort outshines its debut. There are notable exceptions, of course, like No Doubt's Tragic Kingdom, which obviously eclipsed its eponymous premiere. But bands' second albums often bring disappointment. Not so here.

After the show, we stopped by yogurberry. Yes, yogurberry. Apparently, the sprout between the "r" and "b" is not a "t." I really liked the decor -- bright pink walls, black chandeliers, clear ghost chair knockoffs, and backlit alcoves featuring jars of gumballs. Very cute. 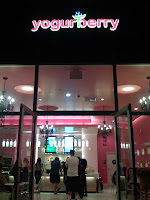 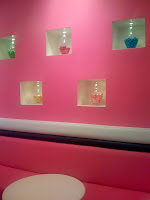 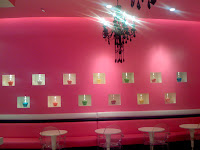 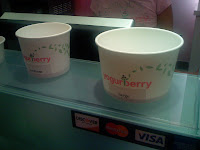 The yogurt, however, was extremely icy and not even close to the caliber of pinkberry, ce fiore, or Red Mango.They were out of mochi, which made us quite sad, so we shared a plain with strawberries, mangos, and mandarin oranges. 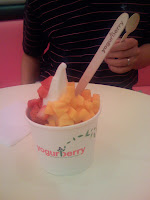 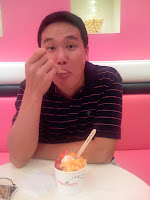 Word of caution: As cute as the printed wooden spoons are, they actually made our yogurt taste like wood. There were plastic spoons available, too, so we threw out the adorable wooden spoons and switched to plastic. Even though the yogurt was icy, it was still good. It's like pizza -- even bad pizza is still pizza, and therefore it's good. Get it?

Tonight we're going to KROQ's L.A. Invasion. I'm not interested in most of the bands, but I do like Hot Hot Heat, Chris Cornell, Velvet Revolver, Foo Fighters, and Smashing Pumpkins. On Monday, we're seeing Peter Bjorn and John. Thursday is time for Arcade Fire, and Muse will be our date on Friday. I'm going to be totally pooped after all of these shows.

I just hope it's not "pooped" like this morning was. TMI, TMI, TMI.
Bananas Unpeeled by weezermonkey at 3:04 PM