I just finished watching all episodes of The Real World: Sydney and Newport Harbor to date. All in a row. That's dedication. I also watched the first two episodes of Celebrity Rap Superstar. So stupid, yet so very entertaining.

My father has always looked down on all things entertainment-related. As children, we weren't allowed to watch more than one hour of TV a week, so we chose carefully. For many years, I watched Murder, She Wrote. I wish I were kidding. Ah, Jessica Fletcher solved so many mysteries! I always thought it was bizarre that so many people died in the small town of Cabot Cove. Eventually, The Cosby Show became my program. I liked it because I was the same age as Rudy, and my father was an OB/GYN, just like Cliff Huxtable. The reality was that our family couldn't be more different from the Huxtables. Later, I switched to Seinfeld. (Best. Show. Ever.) And, even later, I opted for The Simpsons. For half-hour shows, I would figure out some other random half-hour show to supplement, so I got my full hour's worth. Pretty sad.

Once unshackled (read: when I went away to college), I became a TV fanatic. I watched TV all the time, and I still watch a helluva lotta TV today. Let this be a lesson to you parents out there -- your children will only crave what you keep from them! The funniest thing is that my brother now writes for TV. I don't think my father thinks this is very funny.

What is a Monkey blog without food? Tonight, I had a small toasted multi-grain sandwich (lean salami, fat-free cheese, and mustard) and a little bit of watermelon, while Mr. Monkey had a really delicious-looking giant platter of pesto rigatoni. His dinner smelled so damn good, I tell you. Whilst catching up on crap TV , I treated myself to a dessert of two mini cupcakes (carrot cake and lemon) from Leda's Bake Shop, which my dear friend Curly Fries brought to me at work. Mr. Monkey ate the passion fruit and coconut lime. 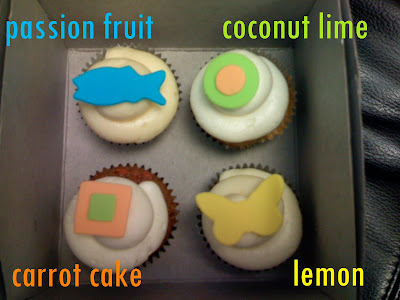 These mini cupcakes are incredibly scrumptious and $1.50 each. I believe it was my friend dapotato who called the delicate buttercream frosting "frothy," which is a perfect description. Leda's mini cupcakes all come with a little bit of filling inside, be it fruit curd, ganache, or cream. These are hands-down the cutest cupcakes in the entire Los Angeles area, and they happen to taste great, too. Unlike Sprinkles, the fondant decorations are rather palatable. I often wish Leda's were closer to the Monkeys. Alas, it is all the way in Sherman Oaks. [sigh]
Bananas Unpeeled by weezermonkey at 11:44 PM