A Date With Kate

My blogger friend Kate, who lives behind the Orange Curtain, was in our neck of the woods today (Old Town Pasadena, to be exact) to have dinner with her college friends, so we hung out together for a few hours this afternoon. Who knew window shopping could be so fun?

Since pinkberry has yet to infiltrate Kate's neighborhood (shocking!), we grabbed some yogurt (green tea + kiwi for Kate and original + strawberries + blueberries + mochi for me), and we hit the streets to gawk at people and wares. I resisted the urge to document our adventure for all of maybe two blocks (not one photo in H&M, although I really should've captured a few choice outfits).

Then I whipped out my trusty iPhone at Urban Outfitters. Nothing's funnier than Jesus humor, at least to us. For those of you who don't have a magnifying glass handy, the shirt says, "Jesus loves you. It's just that he's not 'in love' with you." 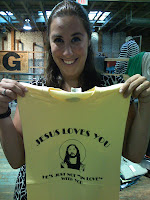 Shopping with Kate is educational. At Sur La Table, I learned about the tagine, a type of pot with a conical cover used in Moroccan cooking. The tagine may be used for braising meat and vegetables on a stovetop. Cool! 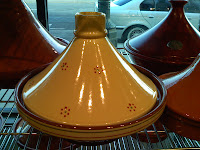 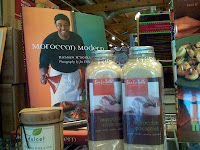 Sur La Table was a goldmine of the bizarre. Don't know how to use chopsticks? Buy these instruments. They have a little ring-like hole on one stick for your finger to stabilize your mysterious Asian utensils. 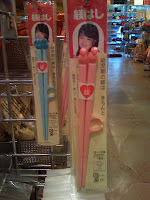 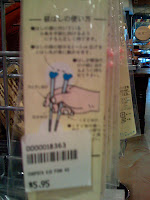 Want a cake in the shape of a castle? How about a stadium? 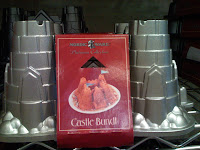 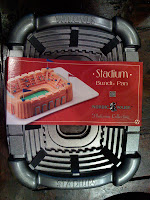 We both thought this mango slicer was sort of dirty looking, especially the demonstrative photo. 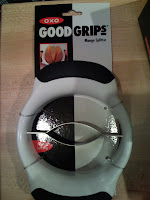 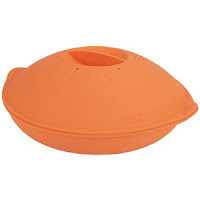 After patiently waiting (these three people hovered for the looooooongest time), we sampled some java from a Nespresso machine. Post-coffee, we went out to stroll along the sidewalks again. We encountered some interesting live window "mannequins" demonstrating pilates moves. 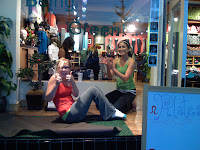 Then we visited the Apple store to play with the new nano fatty. Pictures online don't do it justice. While I prefer the sleekness of the last generation, these new nano fatties were far cuter in person than in photos. I'd thought they looked stupid and bulky before, but they are quite nice -- compact and thin, although Kate and I both questioned whether they would fit comfortably in a pocket. I guess they aren't really fatties after all. 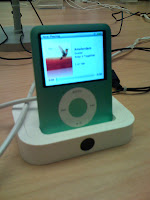 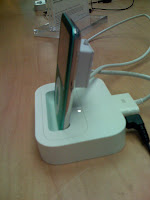 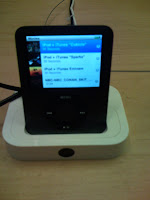 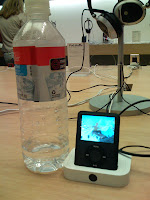 Since some weirdo Eurotrash peeps kept insisting on handling three nanos at once, we went to play with the biggest monitor we could find. Some of you may find the content on our respective screens amusing. 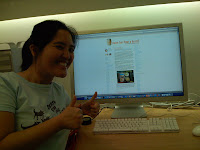 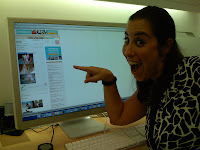 In honor of Kate and her cooking posts, here's a recipe for fun:
(1) Locate largest monitor possible at Apple store.
(2) Find unflattering photo of friend online.
(3) Set image as desktop picture.
(4) Leave Apple store.
(5) Cackle at thought of random customers wondering, "Who the hell is this girl holding a keyboard on this humongous monitor?" 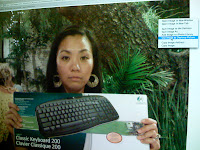 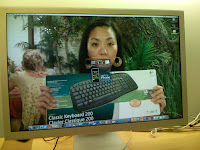 We left the Apple store snorting and went to The Container Store to satisfy Kate's love for organization and to search for a suitable vessel to house mass quantities of dog food that could prevent ants from reaching said dog food. We found a few candidates, but we were more intrigued by these interesting boxes. Kate suggested that we buy them for a certain somebody whose Boston Terrier ate her underwear because they were lying on the floor. (Hint: This certain somebody has already been featured in this post.) 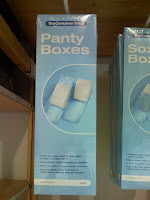 We were also amused by these little suckers. "Whoa! Where'd my sandwich go? I don't see it anywhere!" This gives a whole new meaning to "stealth submarine." 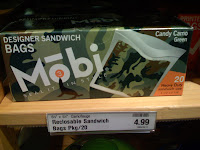 In contrast, you can be an open book with this see-through mesh lunch box. As Kate explained, it's perfect for airport security. Just wave it around and say, "See? It's just lunch!" 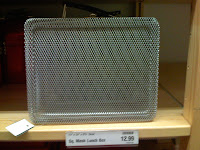 Finally, we capped off the afternoon with a trip to Barnes & Noble. We browsed some travel guides, cookbooks, career books, and -- of course -- wedding magazines. Kate came up with a great array of new possible careers for me, including fire spotter and haystacker (or something like that).

What a great time! Thanks for the laughs, Kate! I wish we lived closer to each other, so we could form our awesome Container Store band. Pop, pop, boing, boing, shh, shh. "Shh" is the sound rice makes when being poured.
Bananas Unpeeled by weezermonkey at 11:48 PM