More Than Just the Whistle Song

Back to The Wiltern the Monkeys go! Tonight's act: Peter Bjorn and John, a fun trio from Sweden peddling catchy tunes, thoughtful lyrics, and sweet beats! They remind me ever so slightly of Belle and Sebastian, but with tighter, less rambling composition and far more poppy hooks. Very poppy. Oh, Sweden, land of ABBA, you produce such peppy pop! 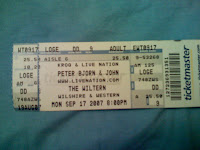 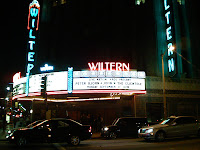 For those of you unfamiliar with Peter Bjorn and John, perhaps you've heard the ubiquitous and cheery whistle song. That song is "Young Folks," so stop calling it the whistle song now, ya hear?

These guys have a healthy sense of humor. The show started off pitch black, punctuated only by strains of an Asian-inspired string instrument (perhaps a sitar) playing...what else? The famous whistling refrain of "Young Folks"! And if that weren't funny enough, this appeared: 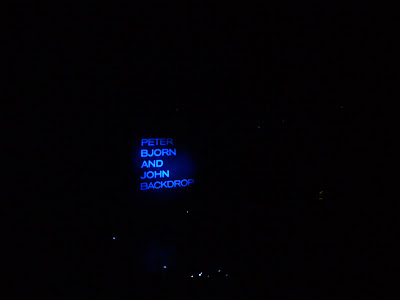 I couldn't help but laugh, and it was just the start of many laughs to come. Why? Peter is a Super Dork who is crazy and dances like a girl. I loved the music, but I couldn't stop snickering. He must be seen to be believed. I also found it highly amusing that, notwithstanding the fact that the band sings perfectly understandable English, the in-between-song banter was nearly unintelligible. They really are like ABBA! Oh, and, for the record, here's a handy-dandy key. 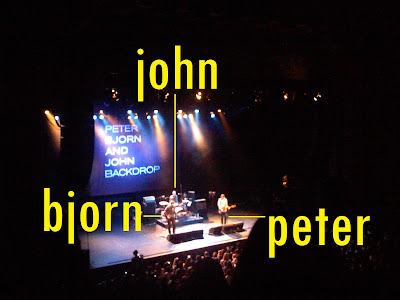 I really enjoyed that Peter, Bjorn, and John all sing! Peter is the frontman and has the highest voice, sort of nasal, yet still pleasant. Bjorn has a naturally low voice and is lead on "Amsterdam," but he sings in the greatest falsetto to harmonize with Peter on most other songs. And, much to my surprise, John has quite the ethereal and haunting voice, rare for a drummer.

It was cool when Mel from The Clientele (the opening band) came on stage to do "Young Folks" with the boys. Can you see her? Hint: She's the one in a dress. 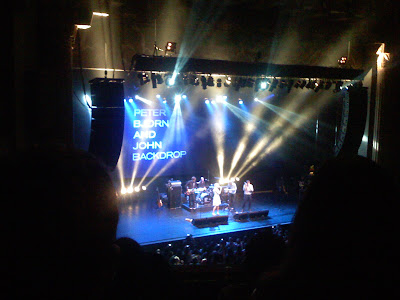 Now here's a montage because I'm too tired to sit and type out creative critiques of all the songs. Let's do this first-grade-style. I liked them. They were good. I had fun. Go buy Writer's Block. It is a great album. They played almost everything from it, with a few old throwbacks from their first two albums. Ok, I cheated. That last sentence was more fourth-grade-style. 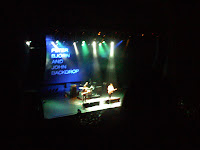 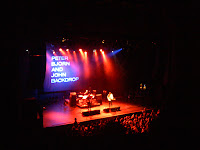 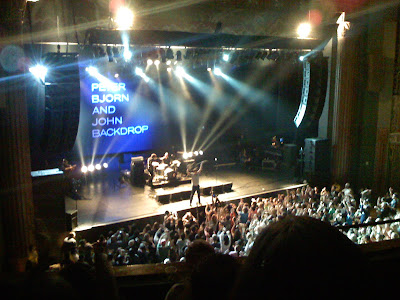 My fave of the night was the last song "Up Against the Wall" (pictured above is Peter hoisting his guitar over his head during this finale). This song is actually in the background of a current Levi's commercial. Hey, a band's gotta make money somehow. Don't hate.

And here's my souvenir girlie tee. I like dogs. 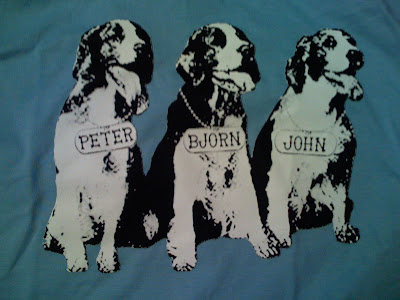 Good night, party people.
Bananas Unpeeled by weezermonkey at 12:46 AM