Before I get into the frozen food war, I'd like to say that my readers rule! Special thanks to Aline and California Girl, who were both so thoughtful to inform me of the $100 iPhone credit! Yay!

Now, back to the usual programming (complete with more reader references, no less)....

While Leslie suggested yesterday that I'm evil for all of my food posts (not a bad theory), I think Alyssa's hypothesis may be closer to the truth. Because I'm so careful about food these days, I'm especially focused on it. I even find myself drawn to other people's food. Tonight, while I made myself a chicken breast quesadilla with fat-free cheese and salsa on a whole wheat tortilla (baked in my toaster oven, not fried), Mr. Monkey decided he'd rather referee a Frozen Cha Siu Bao Showdown (after having already eaten a half a bag of cheddar potato chips before I got home).

A few of you are probably thinking, "What is cha siu bao, WeeMo?" Well, dear readers, it's a fabulous little pocket of goodness! Cha siu (叉焼) is sweet barbecued pork. Bao (包) is generally a bun or bread, usually steamed. Put them together, and you have a steamed sweet barbecued pork bun, which is often a crowd favorite at dim sum. (I think I will explain dim sum another day. That will be a long detailed post with lots of pictures.) 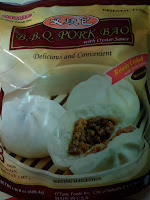 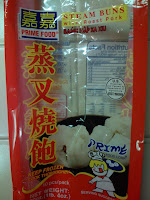 I think Mr. Monkey had already pre-determined a winner before actually sampling, as evidenced by his selection of two Prime Food buns and only one O'Tasty bun. Really, nothing's more Chinese than "O'Tasty." 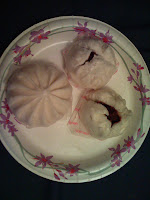 On appearance alone, Prime Food started off ahead. Cha siu bao are rarely completely closed on top, and the bun should be fluffy and almost cake-like in texture and teeming with bountiful pork. O'Tasty's version looks like a completely different kind of savory meat-filled bao, totally sealed and mysterious. Just wrong. Score one for Prime Food.

Since I did not actually eat these, the rest of this showdown is all the opinion of Mr. Monkey, but transcribed with color commentary by moi.

O'Tasty was *meh* at best. Mr. Monkey said he would eat the rest of the bag, but it wouldn't be his first choice from the freezer. The bun was not delicate or airy. It was sort of thin, yet dense -- contradictory, I know, but that's what it was. The meat was salty. Too salty. It also lacked the characteristic sweetness of proper cha siu. Further, the meat was just straight-up brown, when most cha siu has a reddish tinge to it, courtesy of red food coloring. (I guess this lack of food coloring should really be a plus, but it just didn't seem right to us. It's supposed to be red, damn it!)

Prime Food was a far cry from fresh cha siu bao, but at least the bun was fluffy-ish. It was as fluffy as frozen food could be anyway. The meat was sweeter than O'Tasty's. And red. I think it's obvious which bun won. (Hint: Mr. Monkey ate two of them.)