As you know from my previous post, I was intrigued by a fun yellow sign at Famima!! yesterday. I weighed myself this morning and was 151.5, despite having feasted this weekend. (That's another 0.5 down. Crazy!) Having lost that half pound, I felt ok about surveying some yummy diet contraband. When I entered the store today, I saw this... 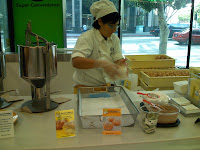 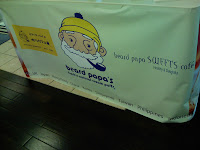 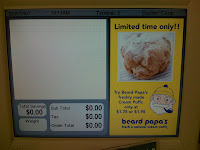 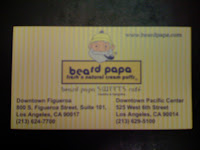 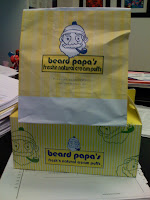 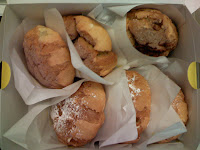 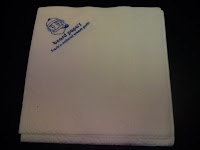 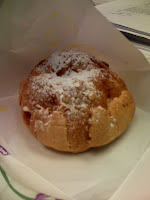 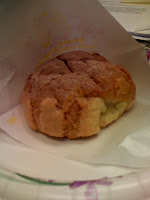 Buy six, get one free! Puffs are $1.75 each, and are available in vanilla and chocolate. Actual Beard Papa locations offer additional flavors, including strawberry, coffee, pumpkin, green tea, and even earl grey tea. Also available at Beard Papa stores is their version of the eclair, which is a vanilla cream puff with a dark chocolate layer on top. That's probably the best thing there.

Rest assured, I didn't eat seven cream puffs by myself. I split a vanilla puff with Perfecta when I got to work and gave one each to my assistant, another secretary, BPLJ, Ironman, and my pal Cheeks (who doesn't sit on our floor but had the marvelous fortune of walking by my office at the right time). I brought the last one home.

I was told that the Beard Papa lady will be at my local Famima!! for a month or so. It's a promotion to generate buzz for two new Beard Papa locations coming soon to downtown. Fun! This will have to be a rare treat, though, as one vanilla cream puff is 220 calories.

For lunch, BPLJ, Cheeks, Ironman, Pescado, and I went to 7th+Fig, as we often do. I hit Mrs. Beasley's and was mesmerized by their new cupcake "poppers," which they are heavily marketing as "only 100 calories!" They are adorable. For size comparison, the right photo has "normal" cupcakes on the top shelf. 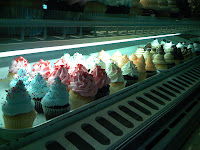 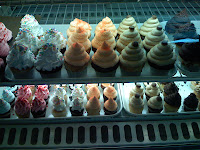 All of the cupcakes at Mrs. Beasley's are really very cute. 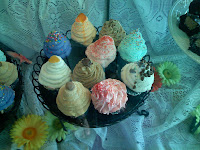 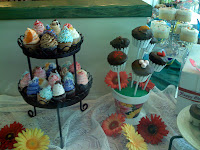 But caveat emptor! Mrs. Beasley's cupcakes suck! The beautiful swirls of frosting are so sweet and almost oily that they'll make you gag. Seriously disgusting. The cake is only mediocre, almost like a poorly made box-mix cake. Their attractive appearance is so incredibly deceptive! Curly Fries and I got suckered into trying these a year or two ago when we were in our Obsessed-With-Cupcakes Phase. We were both totally grossed out and angry that we'd wasted our time on these. They were that awful. Inedible, really.

I did get a tasty chicken club panini (on wheat) from Mrs. Beasley's, though. The sandwiches are pretty damn good. Grill marks make everything taste better! For a panini, a bag of chips or a cookie, and a drink, Mrs. Beasley's charges $6.50. Not a bad deal. I got some Sun Chips and bottled water when what I really wanted was a big fat peanut butter cookie and a Snapple Iced Tea. Ahh, it's the little things that add up. 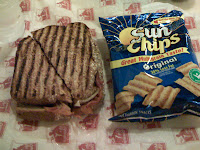 I had a whole vanilla cream puff for dessert tonight after a very tiny dinner of four pieces of brown rice spicy tuna roll, so I'm glad I didn't indulge at lunch. See, it's this forward thinking that's led me this far in my weight loss. Har har har.
Bananas Unpeeled by weezermonkey at 10:19 PM