Rock Is Not Dead

First, for those of you who are wondering (and I know there are at least eight of you), my butt is doing very well today. It seems that my body was uber-efficient in expelling all the badness. Gross, but yay! Good job, body!

I was well enough to go to KROQ's L.A. Invasion last night, although we went later in the evening instead of around 4, as we'd originally planned. (But that's ok. We've seen Hot Hot Heat three times before and Chris Cornell twice, too. No biggie!) How glad were we that it was in L.A. and not in the Inland Empire this year? Mr. Monkey scored some $85 tickets for $55 earlier this week. Sweet.

We arrived at The Home Depot Center just in time to hear Chris Cornell close his set with good ol' Soundgarden's "Spoonman." Pretty fun. That's all I really needed. We had no desire to see Kid Rock, so we wandered around and had some food. Cameras were not allowed, so the iPhone was all I had.

It always amazes me to see droves of idiots standing in a serpentine line for...the ATM. Really? You're too dumb to get money before the show? The line was five times longer than what I could fit in this snapshot. There were that many morons. 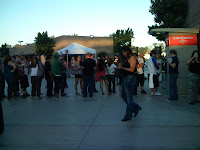 I liked the Smashing Pumpkins zip hoodie. It was $90. I didn't get it. Maybe everybody in the ATM line wanted this hoodie. 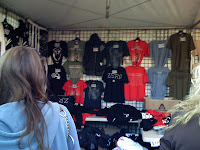 Mr. Monkey and I shared this platter from a "Brazilian BBQ" stand. There are quotation marks because, while tasty, nothing about it seemed Brazilian to us. I ate mostly chicken and salad and had one half a link of the sausage. Mr. Monkey ate everything else. I'm glad we shared. It was a lot of food! 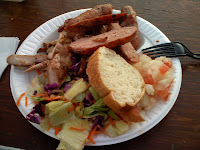 I liked this guy. Invasion! With a purple guitar! 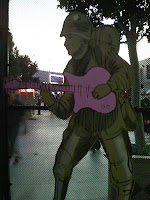 You can't really tell, but below is Velvet Revolver. They were amazing. Scott Weiland is a crazy skinny little heroin cokehead, and I love him for it. He's just awesome on stage. Pure entertainment. Put him together with an Axl Rose-less Guns 'N' Roses (i.e., Slash, Duff McKagan, Matt Sorum, and Dave Kushner), and you've got gold. The band's hits "Slither" and "Fall to Pieces" were well-received, but the crowd really dug it when the conglomerate group did Stone Temple Pilots' "Vasoline," and people went totally nuts for GNR's "Patience." It really cracked me up to see all the kids looking confused during "Patience," while their parents sang along at the top of their lungs. And, man, how can you not love Slash? The top hat, the mess of long curly hair, the cigarette constantly hanging from his mouth? So. Great. I was really impressed by Velvet Revolver. 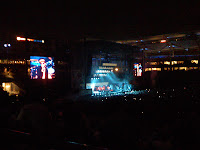 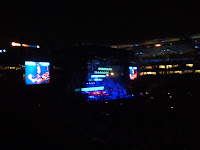 The Foo Fighters had a tough act to follow, but they were incredible and arguably the best of the night. Dave Grohl started off with an acoustic version of "Everlong" -- just Grohl and his guitar alone on the stage -- and, toward the end, his bandmates joined him to shred the rest of the song. I love Dave Grohl. I want him to be my BFF. He seems so personable and funny. The Foo played a really strong set, and it was clear that the majority of the crowd was there for them. It was interesting to see Pat Smear on stage with the band. (For those of you who are wondering, "Who the hell is Pat Smear?" -- he was a late addition to Nirvana who played with the band less than a year before Kurt Cobain died.) 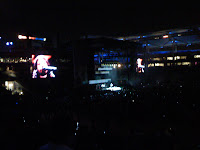 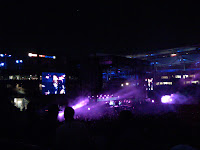 When the Foo were done, there was a mass exodus. I felt a little bad for Smashing Pumpkins, but I was ecstatic to be rid of all white trash (mostly Kid Rock fans) and people under the age of 25. Sadly, though, I must say I was disappointed by the new stuff (and I miss James Iha and D'arcy Wretzky -- two big reasons why I was a fan long ago). 'Twas a little too experimental for my taste, but I loved loved loved Billy Corgan's solo acoustic performance of "1979," and was happy to hear "Bullet With Butterfly Wings," "Drown," "To Sheila," "Tonight, Tonight," and "Today." I also liked when Corgan requested, "Let's all pray for Britney."

I hadn't seen Smashing Pumpkins since the Mellon Collie and Infinite Sadness Tour. I saw them at the Fleet Center (which is now the TD Banknorth Garden) way back when I was still in college. Garbage was the opening band. That was a phenomenal show, and, boy, was that a long time ago, considering my ten-year reunion is next year. Here's a clip I found on YouTube of last night's performance of "Bullet With Butterfly Wings."

Nice job, Brockatthedisco1, whoever you are.
Bananas Unpeeled by weezermonkey at 6:31 PM