Last Dodger Game of the Season

It's not really the last game of the season, but it was for us. We know the Dodgers were total losers this season, but we're true blue fans. Plus, it was Fleece Blanket Night tonight. Mr. Monkey, Brother Monkey, and Brother Monkey's friend accompanied me during the sad battle against the Colorado Rockies.

I splurged and had some Camacho's nachos and a few of my brother's garlic fries. Mr. Monkey ate a Louisiana Red Hot, a burrito, an ice cream sandwich, and kettle corn. The ice cream sandwich alone was 500 calories! I'm often envious of The Bottomless Pit Blessed With an Amazing Metabolism. 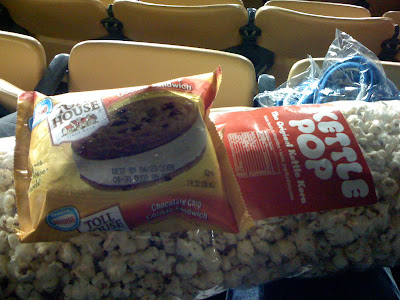 It was a pretty uneventful evening. The Rockies slaughtered the Dodgers, 10-4. At least my nachos were tasty. I've been holding steady at my weight for the past two weeks. I think I may have to kick it up a notch to get back on track to losing even more weight. I am now giving my elliptical an evil glare....
Bananas Unpeeled by weezermonkey at 11:39 PM