Another Day With Dad (and Another Penis Joke)

If you're a loyal reader, you may recall that my father's prostate-specific antigen levels were abnormally high awhile back, so he had a biopsy done on November 9. The day has come and gone, and, aside from Papa Monkey's butt hurting a bit for a day or two, the surgery went swimmingly. We are now awaiting the results, which should be ready the first week of December. Tick tock, tick tock.

Originally, my dad had planned to meet my brother and me for lunch near downtown L.A. yesterday.

[rant]
And, yes, it is "my brother and me," not "my brother and I" -- I hate when people get this wrong. The easiest way to remember this basic rule of grammar is to imagine that the other person isn't mentioned. You wouldn't say, "My dad had planned to meet I," would you? No, you wouldn't.
[/rant]

Papa Monkey was interested in going to the Murakami exhibit at MOCA (which I've been dying to see myself), so we were going to do that after lunch.

A little before 9 a.m. yesterday, though, my dad called me and said he was tired and not up to lunch anymore. He suggested that we get together today instead, so I agreed, called my brother, and we went about our Saturday as usual.

This morning, however, I got another call from my dad. He said he didn't feel well and couldn't drive all the way to L.A. My brother and I decided to drive out to The Valley of the Dirt People to visit dear old dad. It worried me that he was sick and weak. To help cheer him up, we brought him some wonton noodle soup, which is sort of the Chinese version of American chicken noodle soup in that people like to eat it when they feel ill.

My dad seems so much older these days. I still remember when he would leave us in the dust on trails during family vacations. Now, he's small and frail and lonely. Our family dog, Belle, died earlier this year, and poor Papa Monkey lives in a 2500-square-foot home by himself.

Brother Monkey and I spent several hours at our dad's house. Papa Monkey was excited to show us a number of things, including his new Honda Pilot, a new Warhol-esque portrait of Belle, a new pergola that covers a patio set and small fountain, and the first orange produced by his new tiny little orange tree. 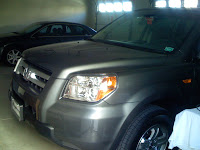 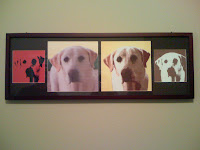 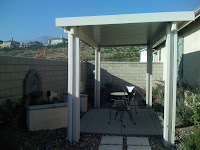 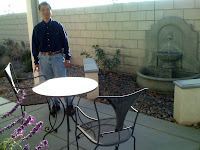 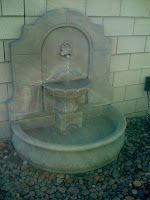 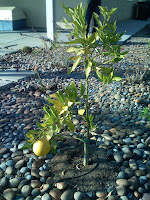 After roaming about the house, checking out my dad's new acquisitions, we sat down to share some little desserts from Austria, courtesy of one of my dad's friends who recently vacationed there. Well, lo and behold, our triangular treat (which was dark chocolate with hazelnut brittle filling) got us all laughing. 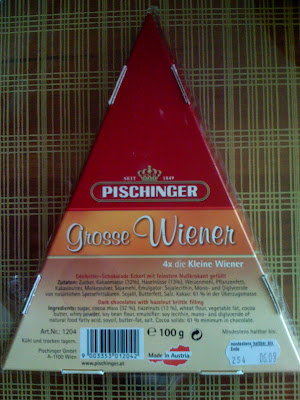 I don't know why I see penis jokes everywhere I go.
Bananas Unpeeled by weezermonkey at 9:56 PM