That's the sound a lame duck makes, and that lame duck would be me!

I had a lovely can of Taiwanese iced coffee this morning, perfectly sweetened with real sugar and just 154 calories, which is paltry compared to a Starbucks or Coffee Bean drink. My favorite part of the coffee, though, is its name. 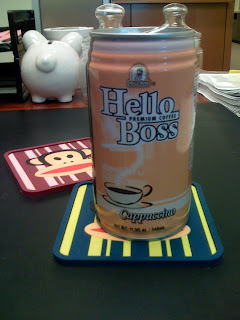 My secretary was particularly amused, as he often calls me "Boss Lady." Hee!

It's a funny thing, hanging around work when you know you'll be leaving in just a few days. People react in different ways. I'm still finishing up a number of things for Rhodes, who is operating more or less in a business-as-usual fashion. Pescado can't even bear to come into my office because he finds its bareness "depressing." BPLJ asked for a trinket to remember me by today (we decided he should take his infamous tip cup back). And Perfecta keeps getting rather sentimental (read: pouty-faced and slightly red-eyed) every time I see her. It almost makes me want to hug her and say, "I'm not dying! I'm just leaving!"

Like old times, I had lunch with B-Dawg and Pescado. B-Dawg had an appellate argument downtown today, so he was in the neighborhood. As much as I love many of my co-workers, it was really nice to have lunch with just the two of them. We hadn't done that in a long time.

Perfecta is planning a big lunch for me on Wednesday. I must say that I'm blessed to have such awesome friends at work. Good people like this -- who are lawyers, no less -- don't really come around that often. If I'm even half as lucky in the friends department as I have been at this firm, I'll be happy at my new job. It's the people I'm going to miss the most. [sniffle]

Non-sequitur: Did anybody else watch Heroes tonight? Whoa!!!
Bananas Unpeeled by weezermonkey at 9:58 PM