I slept until 11:00 today. Sleeping until 11:00 is far more enjoyable than being rudely awakened at 8:30 to be told your pee sample was "too diluted." (Knock on wood my second sample was sufficient -- I didn't get a call today, so I'm assuming it was "concentrated" enough. Ew.)

Because I didn't get a chance to go to the tailor yesterday on account of my weak-ass piss, I turned my bedroom upside down today in an attempt to find everything that needed tailoring. And when I say "upside down," I really mean it. When Mr. Monkey came home, he called me and asked, "What the Hell did you to our bedroom?!"

What I did was tear apart The Pile.

The Pile consists mostly of clothes I toss when I try things on and decide not to wear them. The Pile is huge. The Pile has t-shirts and sweaters and jeans and skirts and jackets and pretty much any article of clothing you can think of, except lingerie. I don't throw my underwear around.

I'm a [lack-of-a-sorely-needed-walk-in-] closet slob. The weird thing, though, is that all the clothes in The Pile are actually clean. I guess that makes The Pile slightly less gross. Right? Right?

After disassembling most of The Pile (it started getting late, so I gave up going through all of it), I ended up with eight pairs of jeans that needed to be cut (original hem, of course). Then I went to my closet (not everything is in The Pile) to get the four suits that needed to be taken in. Taken in! Ohhhh yeah!

I headed to Murat's (9731 Little Santa Monica Blvd., Beverly Hills, 310.276.2672). I went there last year to get my bridesmaid gown altered a bit, and they did a great job very quickly. Curly Fries gets all her tailoring done at their Santa Monica location on Montana. Curly Fries has high standards, so you know Murat's is good.

I put on my first suit, stood on the pedestal in front of the mirror, and, before I could even tell my tailor what I needed, he said, "Wow! Somebody lost a lot of weight!" The cashier chimed in, "Yes! Those pants are so big! How much did you lose? 20? 25?"

I beamed and proudly told them 23 pounds. Yes, it's 23 now! I've lost another pound since becoming a lady of leisure. Crazy! Maybe arguing with stupid guards at Social Security burns lots of calories.

While digging through The Pile earlier, I'd found two random pairs of AG jeans that I didn't even remember owning. I also unearthed six more pairs (575, Blue Cult, Chip & Pepper, Kasil, Lucky, and Taverniti So) that I do remember buying at The Warehouse Sale shortly before getting married. They were buried in The Pile for months. Out of sight, out of mind. Brand new pairs of jeans. When I remembered them again, I was too fat to fit into any of them.

After Murat's, I still had 30 minutes left on the meter, so I walked a few blocks to Crumbs. You'd think that someone who has lost 23 pounds would avoid cupcakes, but your thinking would be incorrect. Anyway, all good things in moderation -- the motto works, and I'm living proof. No need to deprive yourself of goodies. Just eat smaller portions of them!

On my way to Crumbs, I passed these chumps. 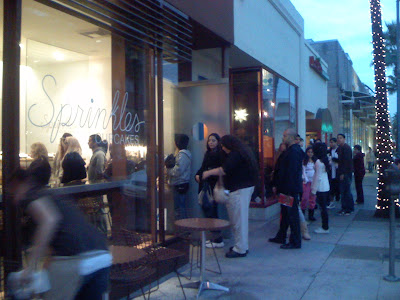 I got the following at Crumbs: 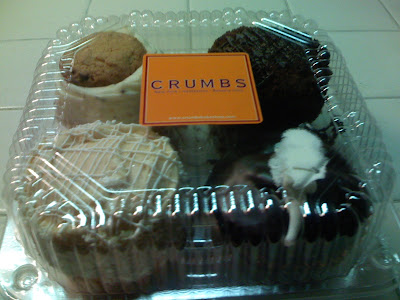 After Crumbs, I drove to Westfield Century City to pick up dinner. Sounds weird, I know, but there is a logical explanation, I promise.

Since having our rehearsal dinner at The Tam O'Shanter Inn last year, we've gotten all these cool Lawry's gift certificates for our birthdays and holidays and other random times (you earn points for the money you spend at any Lawry's establishment, and the Lawry's company sends you these benefits). We had to spend Mr. Monkey's $25 birthday gift certificate by today, so I picked up two platters at Lawry's Carvery at the mall.

It's pretty much the best damn food court meal you could ever get. We shared the prime rib with au jus and horseradish and the brisket with barbecue sauce and crispy onions, each of which came with sides of both creamed corn and macaroni and cheese. I paid $3.23, which made the meal even more delicious. 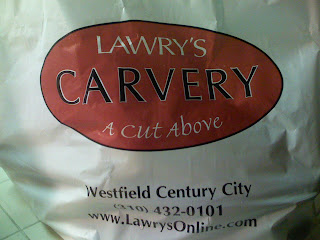 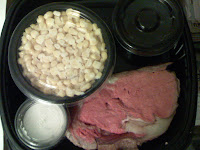 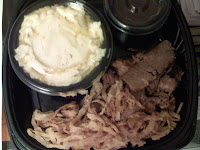 After dinner, I opened a mysterious package. It was from my Nestie Secret Santa. What a great Nestie bestie! Here I am, modeling my nifty gifty! And there I am swiping my iPhone from Mr. Monkey! 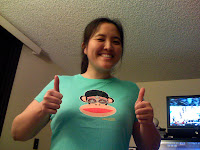 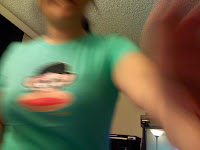 Thank you, Nestie Secret Santa! I love my t-shirt! It is SO much better than an ornament! Like a million times better! Yay for exclamation marks!

My cool present put me in such a good mood that I decided to attempt to organize The Pile some more. Lo and behold, I found two more pairs of jeans. I slipped on the Paige Premium Denim (the Hidden Hills cut, if you're curious). They fit! I tried the Juicy Couture jeans. I was swimming. Drowning, really. I actually disposed of four other pairs of jeans earlier because they were huge, but I can't bear to throw away these brand new Juicy jeans!

Anyone want some jeans? They are the Cali cut (low rise bootcut with a flattering somewhat trouser-ish wide leg), dark indigo, 32 waist, and still have the tags! They are six or seven inches too long for me, which means they would fit anyone up to about 5'10" or so. They've never been worn, except for when I tried them on in the store and when I tried them on today!

My weight loss is your gain!
Bananas Unpeeled by weezermonkey at 11:37 PM