I frantically searched for my Tacori hair pins this morning. I was meeting some friends for brunch, including Jane, the intended recipient of my lovely pins. She's getting married this Saturday!

The lovely pins have been put to very good use. Obviously, I wore them on my own wedding day, but I also lent them to Winnie and tater for their weddings.

After e-mailing the girls that I might show up empty-handed because I'm totally scatterbrained and misplaced the mother-of-pearl lovelies, I finally found them! For some reason, they were sitting in the sad monkey "baby" favor bag that mrs. shorty cake had made especially for me for Wan's baby shower. 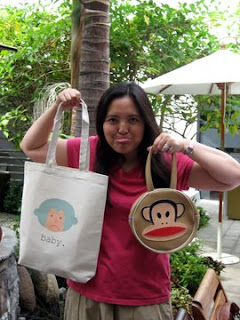 I met Jane, tater, Lilcee, and Wan at The Kitchen for a yummy brunch. I was really relieved that I didn't need to show up empty-handed, and I happily handed over the Tacori pins to the next bride. 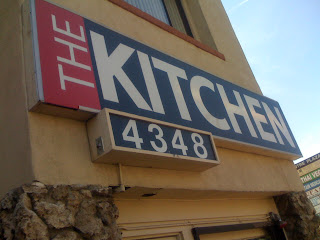 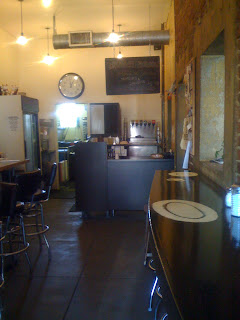 tater and I heeded The Kitchen's chalkboard sign and had sangria and a mimosa, respectively. 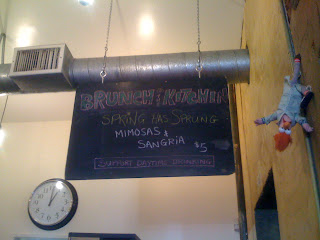 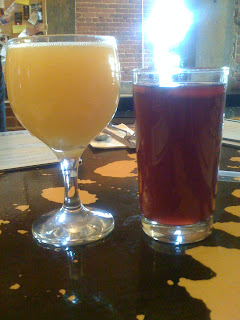 We all shared an appetizer of macaroni and cheese with extra sharp cheddar cheese and garlic cream sauce. The flavor was quite good and the macaroni al dente. While thoughtfully seasoned, I think it could've used a tad more *oomph* and perhaps an ever-so-slight touch of softness. Truth be told, I like my mac 'n' cheese a little mushier. The garlic was a great modification of the familiar comfort food, though. 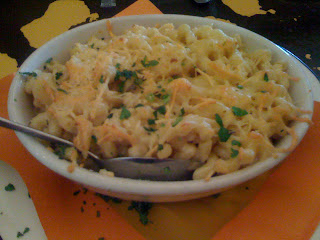 I had a breakfast sandwich with prosciutto, fried egg, frisee, and bleu cheese. tater chose the pear pancakes with caramel sauce, accompanied by bacon and potatoes. Jane opted for a scramble with avocado, mushrooms, bacon, and provolone. Lilcee dined on a scramble with tomato, basil, bacon, and mozzarella. Not pictured are Wan's herb baked eggs topped with parmesan and accompanied by bacon and potatoes. 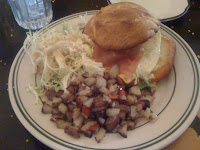 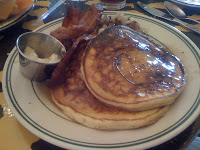 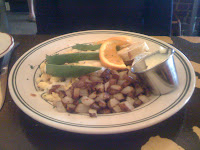 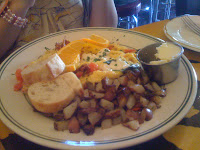 Being the little Joy Luck Club that we are (this is what one Kitchen employee called us, no joke), we all sampled each other's entrees and said, "Mmm." The Monkey gives thumbs up to The Kitchen, notwithstanding her being labeled an Amy Tan character by The Kitchen staff. The most expensive brunch item is $11, so the meal was not outrageously priced. 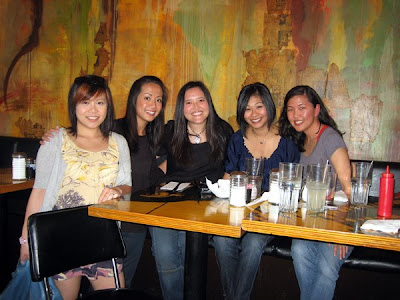 After brunch, Lilcee, Wan, and I headed to A Snail's Pace at the Paseo Colorado in Pasadena. 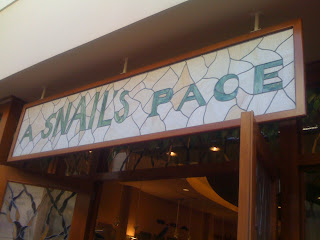 It was sort of an impromptu group trip. I'd planned to go all along to get fitted for new running shoes. I mentioned this at brunch. It just so happened that Lilcee needed a new visor, while Wan also needed to get fitted for shoes, so we made it a group outing! 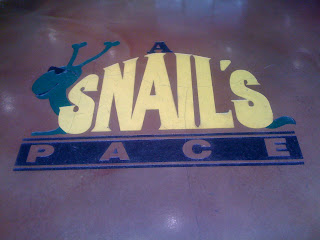 A salesperson helped Wan and me get the right shoes for our feet (yes, "me" -- if you don't understand why, read my previous mini grammar rant about this). Here's Wan running in the store. 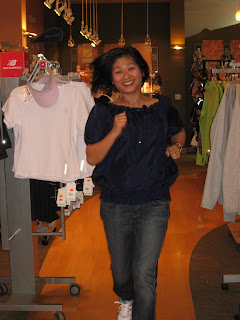 I wear a neutral running shoe because I have little to no pronation. We discovered this when the salesperson carefully observed my feet as I ran up and down the back hall. Rumor has it, sneaky Lilcee got a video of me running in my rolled-up jeans. It is possible that this video may surface soon. I am already embarrassed at the mere thought.

I tried on four pairs of neutral shoes: Adidas, Brooks, Saucony, and Mizuno. The Adidas were really light and cushioned. I felt like I was running on a cloud. The Brooks were weirdly pointy and stiff. The Saucony shoes were comfortable enough, but not as cloud-like as the Adidas. The Mizunos were extremely light, and I *felt* fast in them. 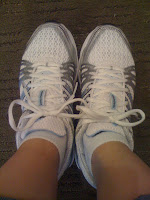 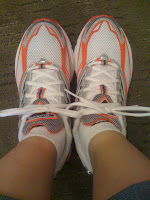 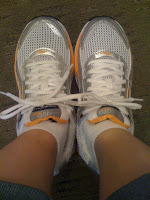 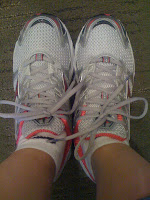 My faves were the Adidas adiStar Cushion 6 and Mizuno Wave Rider 11. Here are some better pics than the ones above.

The salesperson told me to put one on each foot, and it was instantly clear which was the better shoe for me. Even though I really loved the look of the Mizunos, there was no comparison. The Adidas were awesome. Cloud, I tell you! Wan posited that I may have preferred the Adidas because I wear Adidas so much, and I think she's right. I already have five pairs at home, two of which I wear rather frequently.

I leave you with a Run D.M.C. classic:

My Adidas walked through concert doors
And roamed all over coliseum floors
I stepped on stage at Live Aid
All the people gave, and the poor got paid
And out of speakers I did speak
I wore my sneakers but I'm not a sneak
My Adidas cuts the sand of a foreign land
With mic in hand, I cold took command
My Adidas and me, close as can be
We make a mean team, my Adidas and me
We get around together, rhyme forever
And we won't be mad when worn in bad weather
My Adidas
My Adidas
My Adidas

Standin' on 2 Fifth Street
Funky fresh and, yes, cold on my feet
With no shoe string in 'em, I did not win 'em
I bought 'em off the Ave with the black Lee denim
I like to sport 'em that's why I bought 'em
A sucker tried to steal 'em, so I caught 'em and I fought 'em
And I walk down the street, and I bop to the beat
With Lee on my legs and Adidas on my feet
And now I just standin' here shooting the gif
Me and D and my Adidas standing on 2 Fifth
My Adidas
My Adidas

Now me and my Adidas do the illest things
We like to stomp out pimps with diamond rings
We slay all suckers who perpetrate
And lay down law from state to state
We travel on gravel, dirt road, or street
I wear my Adidas when I rock the beat
On stage, front page, every show I go
It's Adidas on my feet, high top or low
My Adidas
My Adidas

Now the Adidas I possess for one man is rare
Myself, homeboy, got 50 pair
Got blue and black cause I like to chill
And yellow and green when it's time to get ill
Got a pair that I wear when I'm playin' ball
With the heal inside make me 10 feet tall
My Adidas only bring good news
And they are not used as selling shoes
They're black and white, white with black stripe
The ones I like to wear when I rock the mic
On the strength of our famous university
We took the beat from the street and put it on TV
My Adidas are seen on the movie screen
Hollywood knows we're good if you know what I mean
We started in the alley, now we chill in Cali
And I won't trade my Adidas for no beat up Bally's
My Adidas

Clearly, this will be on my Nano when I run!
Bananas Unpeeled by weezermonkey at 8:29 PM