I am officially an old lady. Why? I got together with Amber, Wan, tater, Lilcee, and Jen yesterday to walk. You read that right. Walk. Granted we did a couple miles, but still. We were walking on a Sunday morning. Hags! 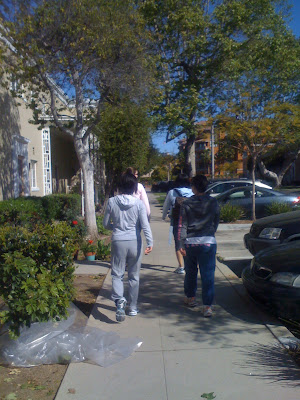 Post-walk, we went to the Farmer's Market to grub. 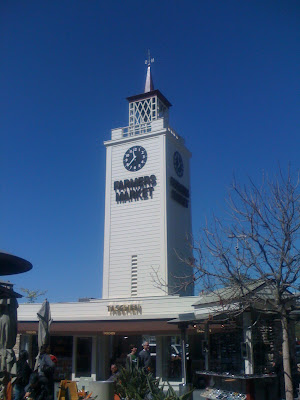 We stopped briefly at Nike. 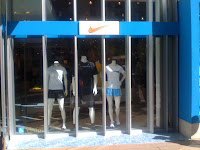 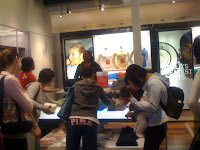 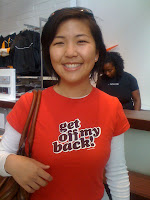 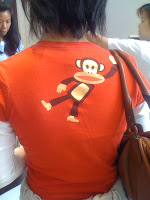 We hit Barnes & Noble, too. 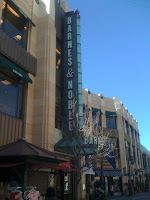 Amber, Wan, and Jen opted for just crepes at lunch, while tater, Lilcee, and I headed to Loteria Grill first for yummy huevos con chorizo and ended with sweet waffles and crepes for dessert. Three cheers for variety! As usual, my meal from Loteria was simple and well done, and my classic butter and sugar crepe from The French Crepe Company exceeded my admittedly low expectations. 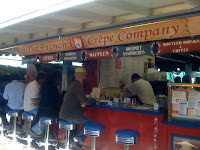 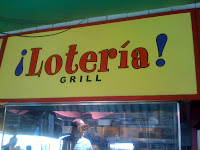 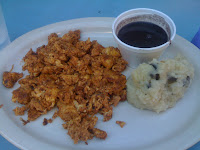 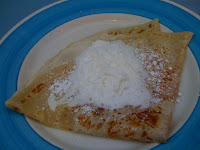 It was cold in the shade. All look same! 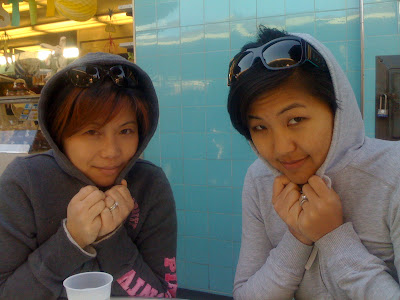 Trisha came to meet us for lunch, and we celebrated Trishmas (her birthday, for those of you unfamiliar with the term) with a cupcake and a book. 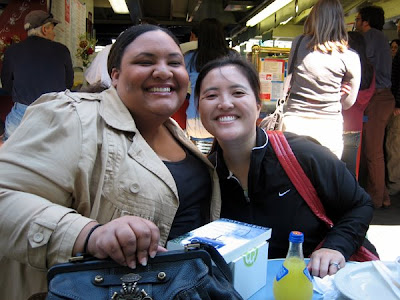 After lunch, we walked back to Amber's place and played with Wan's baby for a bit. That baby is so damn cute and so incredibly un-fussy and happy. 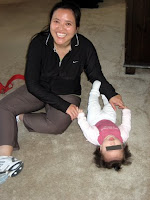 I do believe she is the happiest baby I have ever encountered, and even I was delighted by her joyful noises. Seriously good baby. That's high praise coming from me.

One thing that possibly delighted me more? A custom-made Lilcee Original! tater talks about it here in all its glory. It's a neat little pouch for my Nike+ to attach to my non-Nike shoes. 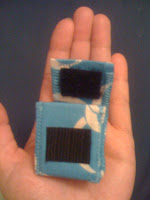 Thank you so much, Lilcee! I love it! It even matches my shoes and is totally cuter than those sold in stores.

Hours (and several loads of laundry) later, I went to dinner with Papa Monkey at Good Time Cafe (140 W. Valley Blvd., #209, San Gabriel), which serves inexpensive Taiwanese food in a no-frills environment. The service is excellent -- very friendly and polite -- which is a rarity in places like this.

The food is satisfying but not outstanding. I would go back, but I wouldn't be dying to do so. I was impressed by the "A" rating, though, which is another rarity for places like this. I really wish the food were a smidgen better. Then this place would probably be a Monkey favorite.

Bi-ko is glutinous rice with some mushrooms and meat in it. It is slightly firmer than the sticky rice wrapped in lotus leaves that you often find at dim sum. The bi-ko was done quite well. The Taiwanese meat ball (rou yuan in Mandarin, ba-wan in Taiwanese) had a lovely chewy rice skin, but I was not impressed by the flavor of the meat and bamboo shoot filling. This is one of my favorite dishes, so I was very sad it wasn't up to par. 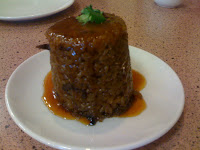 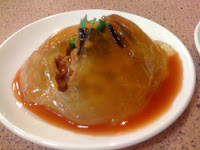 The fried tofu was dry and borderline bad. The sauteed oysters were eaten entirely by Papa Monkey, as I do not eat bivalves. 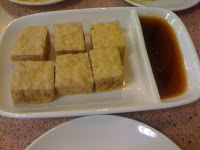 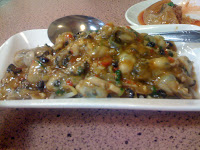 Good Time Cafe's pork gua bao had a nice sauce and the flavor of the meat was palatable, but the quantity and quality of meat was sorely lacking. Too much fat! Too little meat! I also like my gua bao with more crushed peanuts and sugar. The sauteed small bok choy was adequate and nothing special. 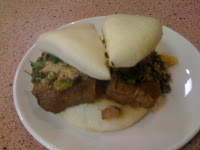 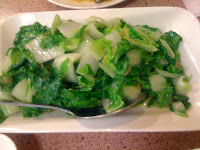 What was sort of special was the conversation that Papa Monkey and I had. I don't know why, but my parents always feel the need to discuss Brother Monkey's future with me instead of with Brother Monkey himself.

Papa Monkey is very concerned about Brother Monkey's career and thinks that Brother Monkey should take the LSAT again (Brother Monkey took it long ago and got an amazing score, but it has since expired) and go to law school. This makes me sad for too many reasons to enumerate.

I wouldn't wish the legal profession on anybody, let alone my dear little brother. Almost every lawyer I know is totally disenchanted, disillusioned, and disgruntled. It's a career that creates dissatisfaction. Those lawyers who aren't disappointed with their jobs are simply hanging on semi-complacently. Others are too early in their careers to have been totally beaten down.

I can probably count on one hand the lawyers I personally know who are truly happy about being lawyers.

And that is sad.

Brother Monkey is so talented in so many ways. I think the world of law would be a waste of his creativity.

Papa Monkey worries about Brother Monkey's financial stability and his capacity to sustain a family. Really heavy stuff. Papa Monkey seems to think that Brother Monkey should go into academia or eventually become a judge.

Ability is not an issue. Brother Monkey could basically do anything he wants. He is that smart and that capable. The real question is whether Brother Monkey has any interest at all in pursuing these paths.

Frankly, it makes me incredibly depressed to imagine my joke-writing brother reduced (yes, reduced!) to just another (yes, just another!) serious intellectual.

Mr. Monkey's cousin asked me three years ago whether she should go to law school. I gave her an emphatic HELL NO. Even after listening to me carefully explain all the reasons that the legal field is a Black Hole of Misery, she still went to law school, and now she is fretting about job placement and this and that.

I simply want Brother Monkey to be happy and not have to do something boring like I do.

But maybe being boring is a part of achieving stability.

And maybe stability is a part of growing up.
Bananas Unpeeled by weezermonkey at 11:59 PM