On Day Six, the Monkeys woke up and had a delicious free breakfast buffet at La Pergola and then met our driver for our trip to Estancia Lolita.

We stood outside our awesome Hotel Jose Nogueira, and a Mercedes pulled up. I whispered to Mr. Monkey, "Wouldn't it be great if that were our ride?" And it was! No harrowing van ride today! Providence smiled upon us, and, in a great turn of events, the Monkeys and our private driver Claudio cruised along a beautiful smooth road in a Benz. Ahh...now this is the way to travel!

Claudio spoke no English, so Mr. Monkey and I spoke only Spanish for several hours. We learned that Claudio loved the NBA, and he and Mr. Monkey had a good time talking about team records and the latest pending trades.

After an extended discussion about the popularity of various sports in Chile, we arrived at Estancia Lolita, a small farm in the middle of nowhere. Strong winds gusted through the rolling hills and fields. We zipped up our windbreakers, threw on our hoods, and put on our warm gloves. 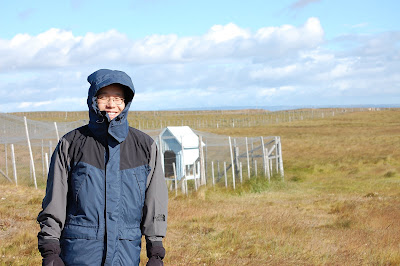 Like the farm in Peulla, Estancia Lolita was both bucolic and bizarre. Privately owned, the small farm had a number of rather exotic animals, some of which really surprised us.

We observed a wildcat noshing on some bloody meat in the small shack behind Mr. Monkey in the photo above. The cat was just hunched there eating. In a shack. On a farm. 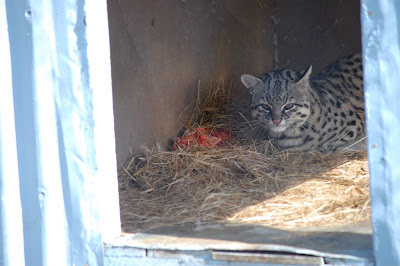 Not quite as surprising were the guanacos. They were extremely timid and terrified of us. One would spot us and warn the others. Then all of them would look at us and run away together. Herd mentality at its finest! Mr. Monkey and I split up and each did our best to corner and chase them toward the other for photos. 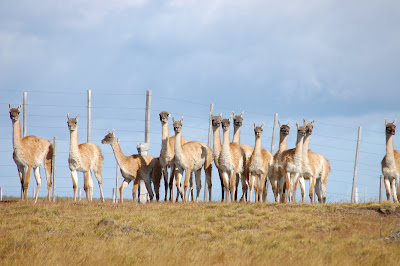 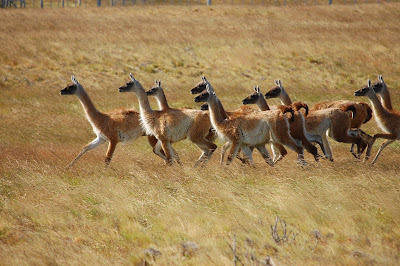 Post quasi-corraling of guanacos, we came across a small freestanding room in which a person could live amidst the farm animals. I call it the rustic Chilean studio. 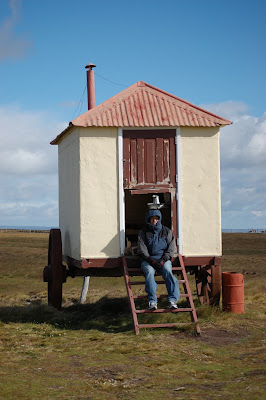 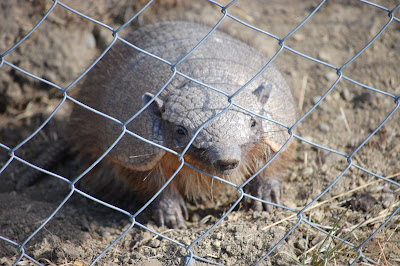 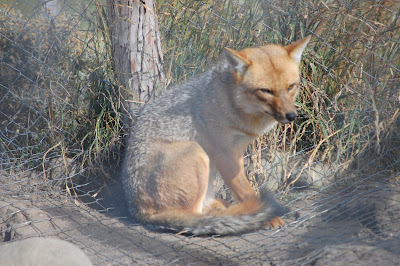 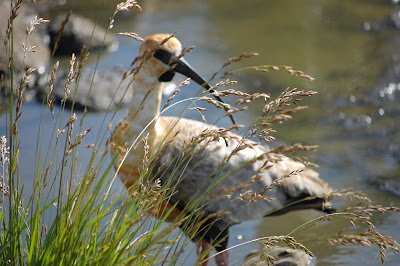 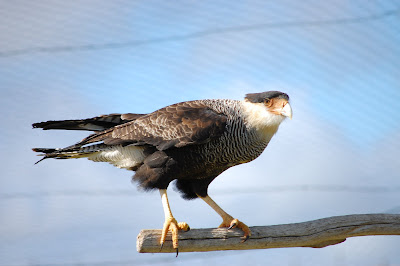 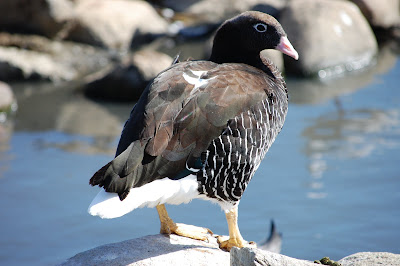 Then we saw the most astonishing sight -- two pumas in a flimsy shack lined with chicken wire. Even more astounding was the fact that the little old man who runs the farm went right up to Simba #1 and stuck his fingers into his mouth. Yes, Simba #1. Both pumas were named "Simba." The little old man must really love The Lion King. 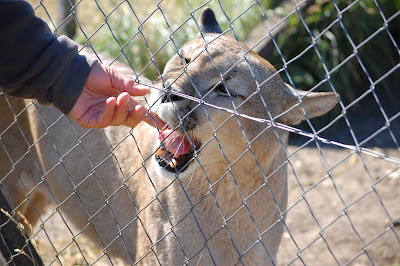 Claudio drove us back to the Hotel Jose Nogueira, where I snapped a few last shots of quite possibly the grandest, most stately room in which we'll ever stay. 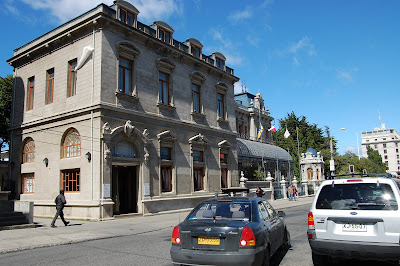 I looked like a total stalkerazzi perched precariously atop a cement block, holding onto a tree and trying to get a [not very good] picture of our window at the back of the building. 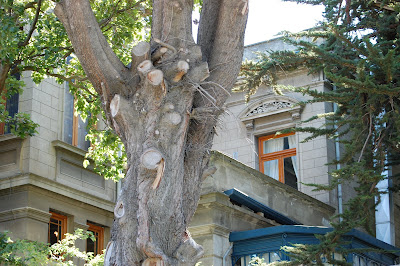 We checked out of our majestic room and headed to lunch at Sotito's, which Claudio had recommended to us, specifically the conger eel dishes. Sotito's sign looks like this... 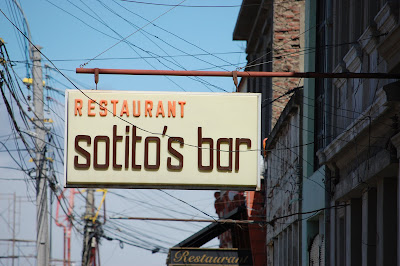 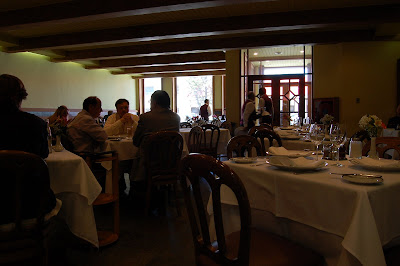 Mr. Monkey started again with king crab chupe (he really really loves it), while I opted for some simple tomato soup. He had the plain grilled conger eel, and I had the conger with seafood cream sauce and papas fritas. Everything was muy sabroso.

Lunch was followed by a few hours of walking the streets of Punta Arenas. Mr. Monkey bought a wool tuk, and I got a pink beanie (both will be pictured in posts to come). Then there was some last-minute Internet time for both of us before we boarded the Via Australis, the ship upon which we will spend the next several days exploring the southernmost parts of Patagonia (sans the World Wide Web). 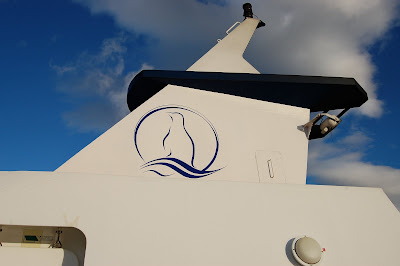 Before we boarded, we had yet another close encounter with a cute stray. 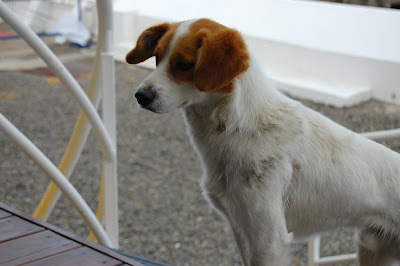 From the Hotel Jose Nogueira, we went to this little room. In the grand scheme of things, though, it's actually big for a ship cabin -- much larger and nicer than the cabin during our trip to the Galapagos Islands in 2004. 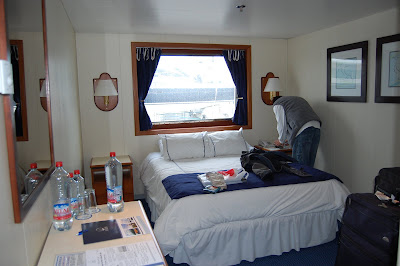 Empanadas and open-faced finger sandwiches greeted us when we embarked. 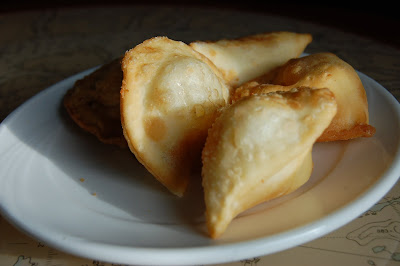 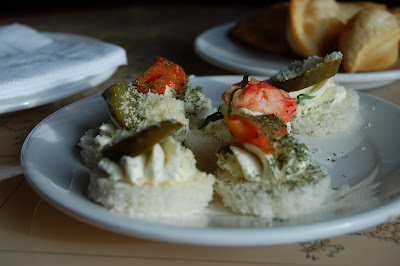 I liked the framed knots on the wall, one in particular. No, not that one. 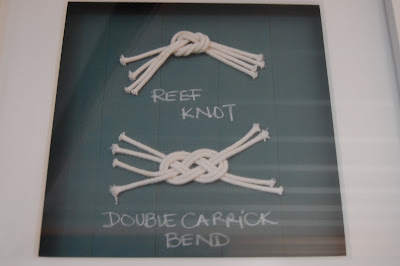 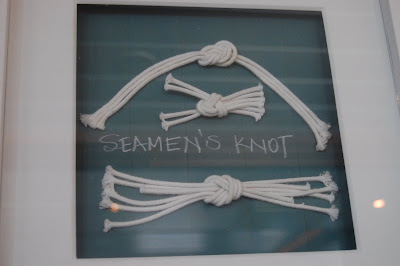 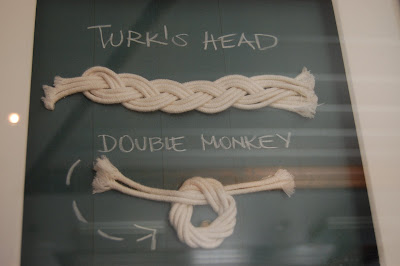 The food on the Via Australis is quite good, although I refrained from taking photos, as we were seated at a table of eight.

Six of the eight people at our table are or used to be lawyers. Obviously, the Monkeys accounted for two of the six. The others included a husband and wife from South Carolina (retired law professor and retired in-house counsel) and a brother and sister from Detroit (retired judge and city attorney). The non-lawyer couple was from Florida.

We were pretty happy with the seating arrangement, as we were a tad worried that, based solely upon our appearance and names, the powers that be would stick us with a bunch of Chinese senior citizen tourists who were on the boat.

Seriously. It has happened to us before.

When we went to the Galapagos Islands, our assigned seating was with Japanese people.

Because we were Asian.

All the other Americans sat at tables across the room, while we were forced to eat amongst our non-English-speaking yellow brethren. And then the crew was totally amazed at our perfect English. When they finally realized we were American (and not even of Japanese descent), it was too late to change tables.

(The story really isn't that bad, though. We befriended two very cool Japanese girls who were eager to practice their English with us, and it was far more fun hanging out with them than several ornery old American retirees and a really annoying rather overweight couple who constantly complained and hiked really slowly.)

Luckily, seating here was determined by reservations. Mr. Monkey and I were the first two people to book a table -- the one next to the window with the best view. Maybe that's why our table had six lawyers. We're all gunners.
Bananas Unpeeled by weezermonkey at 5:38 PM