You would think that, with on-demand movies, audio, and games, our flight to Santiago would've been awesome. Not so. It was the pits and left us terribly haggard and worn.

When we finally wanted to sleep (after taking advantage of the in-flight entertainment system), some stupid girl across the aisle from me literally coughed non-stop for SIX HOURS STRAIGHT. I'm not even exaggerating. Everybody around us was totally annoyed. Two people actually walked over and gave her cough drops at different times, which, being the inconsiderate idiot she was, she didn't take!

And here is a classic example of why I'm a bitch, and Mr. Monkey's a saint. When I whispered my frustration to him, he simply whispered back, "Think of how she must feel, though. She is so sick, is on a plane, and knows she is causing everyone to suffer through her own suffering."

Saint, I tell you.

I maintain she was an inconsiderate idiot. She was wearing shorts and socks with holes, and, I repeat, did not take the cough drops given to her. Wrap yourself in a blanket, and stuff your mouth with lozenges! It's not that hard!

When we finally got off the plane at 6 a.m., we were zombies. I was so glad when we got to our hotel. 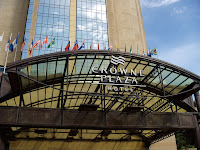 We each took a hot shower and then crawled into bed for some much needed sleep. After napping for three hours, we got up and started exploring Santiago. 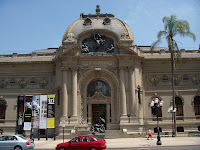 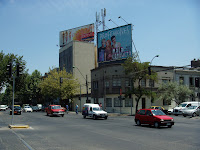 We went to the Bellavista area for lunch at a seafood restaurant called Azul Profundo. 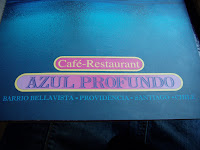 The restaurant was decorated as if it were a boat (duh, it's called "Deep Blue"). I didn't know I had an exposed boobie hanging right over my head until Mr. Monkey pointed it out to me. 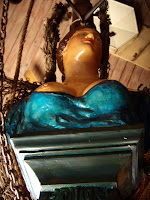 We started with some shrimp and cheese empanadas and shared the mixed grill for two, which had different types of fish with sauteed spinach, tomatoes, and potatoes. 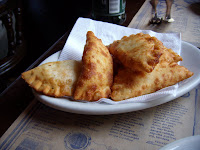 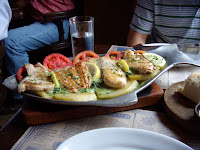 After lunch, we walked around Bellavista a bit and then headed to the funicular up to the Santuario de la Inmaculada Concepcion, which I will blasphemously call Big Virgin Mary for ease of reference. 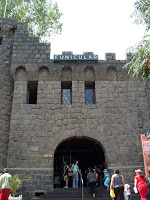 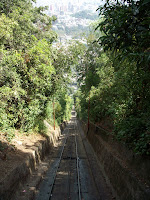 One thing I've noticed already is that there are a lot of stray dogs here. I'm not even sure how these dogs got up the steep hill. Did they ride the funicular, too? 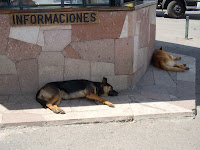 The funicular takes you up pretty high, but you still have to make the trek up many stairs to see Big Virgin Mary. 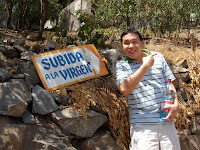 There she is. Big Virgin Mary. 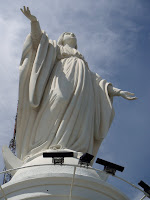 This is how Big Virgin Mary sees Santiago...that is, if she saw it through a little Nikon Coolpix S9. (I left my DSLR in the hotel because I didn't want to lug it around town. It was hot out!) 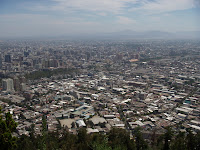 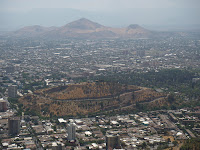 Here's where people light candles for Big Virgin Mary. I nearly slipped and killed myself because the wax drippings made the floor quite slick. That would've been Big Fall Scary. 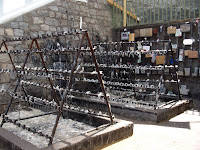 Before we went back down on the funicular, we decided to ride the teleferico, too. This, my friends is nothing more than a cable gondola, otherwise known as The Skyway at Disneyland. 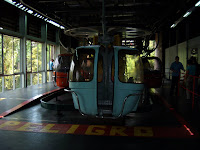 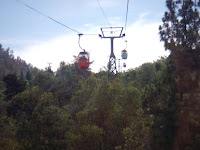 It seemed like a good idea at the time, but it turns out these babies are tiny little ovens that aim to roast you alive while you're hanging perilously high over the wooded mountaintops. Mr. Monkey remarked, "You're lucky that I don't have the camera because you are one nasty sweaty mess." Hmm. Maybe this smiling guy isn't such a saint after all. 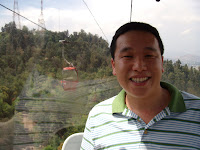 The afternoon was filled with more exploration of the downtown area. If you are someone with personal space issues, this is not the city for you. It's sort of like a cross between Manhattan and Taipei. 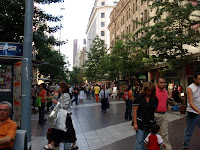 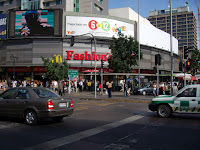 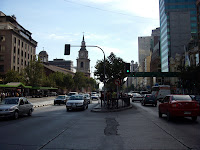 The Mercado Central was like Pike Place Fish Market meets Grand Central Market meets your local farmers' market...except all in Spanish and ever-so-slightly more primitive. Chile is quite the wealthy country, but it's still just a baby step behind the U.S. in a few respects. Then again, isn't almost all of the world? I sure do love our country! (Sorry. Ugly American moment.) 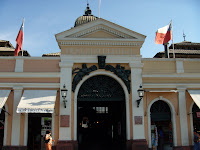 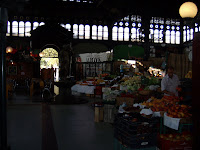 We walked through the shopping district and Plaza de Armas, which reminded me of Harvard Square with all the crazy-intense chess-playing. 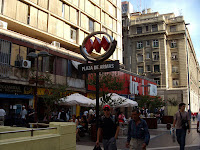 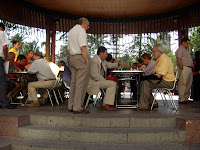 It was about 7 p.m. when we came back to the hotel completely exhausted. We'd walked so many miles in the sun after enduring a sleepless night on the plane with Coughing Girl. Both of us were about to collapse.

After another hot shower, we ordered room service (seafood stew, au gratin corn pie, fried conger, and a strawberry shake for Mr. Monkey). Mr. Monkey observed that this was in line with our usual travel practice -- we almost always get room service for dinner on day one because we're just too damn tired!

Sorry that there are no pics of dinner. I was tired and ravenous at the same time and simply couldn't be bothered to use my camera in the hotel room. I can tell you, though, that the au gratin corn pie was freakin' awesome. It's actually called pastel de choclo gratinado con azucar, in case you'd ever like to order it. Imagine a savory stew-like bottom filled with meat, onions, and other vegetables topped with a cheesy and somewhat sweet moist cornmeal on top and then all baked in a hot pot. Que sabroso!
Bananas Unpeeled by weezermonkey at 6:40 PM