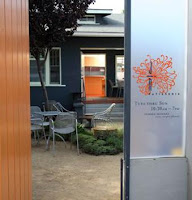 Nestled behind both modern frosted glass and green shade trees, this quaint little bungalow offers a light menu with various tea sets, salads, quiches, sandwiches, and sweets. We all opted for the High Tea ($18), which included a pot of infused tea or other beverage of your choice, two finger sandwiches, a savory mini-quiche, two scones accompanied by clotted cream and homemade marmalade, a sliver of pound cake, three or four other sweet treats, and a small chocolate. Salads range from $6.50 to $12. Quiche and sandwich sets cost $12 to $14. All sweets may also be purchased a la carte for dine-in or take-out. 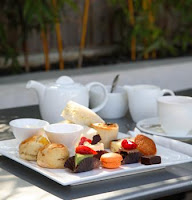 Everything in the High Tea set was delicate and delicious. I chose the Melange du Cap tea, a red tea native to South Africa flavored with cocoa and vanilla pods. It was light and sugary-smelling without being actually sweet. The scones were great -- just moist enough not to be dry, while retaining that characteristic somewhat crumbly scone quality. The clotted cream and marmalade complemented the scones well...so well that I ate half of Connie's delectable accoutrements. All of the pastries and cakes were perfectly sweetened. A pet peeve of mine is when desserts are too sweet. Not at Jin! 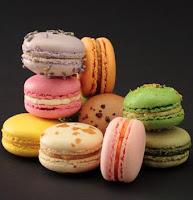 I gobbled up both my egg salad sandwiches, and I'm totally not a cold egg person. That's huge that I liked them. Oh, and the quiche! It was warm and cheesy and flaky and yummy for my tummy. Monkey gives thumbs up to both taste and ambience.

Upon our departure, my cohorts each bought an 8-piece box of French macaroons ($12). I have not sampled them, but they looked divine. I await reviews, tea chums!
Bananas Unpeeled by weezermonkey at 5:41 PM

Email ThisBlogThis!Share to TwitterShare to FacebookShare to Pinterest
Labels: tea