Albert J. Langer died Sunday. He was 94. Does the name ring a bell? Yes, this is the Langer -- the man who founded L.A.'s venerable palace o' pastrami. 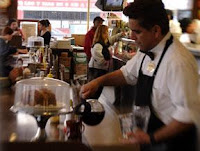 Langer opened Langer's Delicatessen in 1947. The old-school deli has been making mouths happy for 60 years. Part of Langer's charm is that the place hasn't changed much at all. Whenever I eat there, I feel like I've taken a ride in a De Lorean, and Doc Brown will show up any minute to tell me the flux capacitor is broken, thus stranding me in the 1950s.

Even with the influx of a predominantly Latino community in the 1980s and 1990s, Langer's persisted. I still remember the first time I tried Langer's in 2000. I was a summer associate at my first law firm, and my friend Sisqo (not his real name) and a few other associates took me there, declaring that I was about to sink my teeth into the best pastrami sandwich ever. I thought it strange that this traditional Jewish deli was smack dab in the middle of español galore. When I walked in, however, the place was packed with people from all walks of life, brought together by their shared love of salty smoked meat.

I tried a #10. Seven years later, it's still my staple, along with crinkle-cut fries and a slice of apple pie a la mode with brandy sauce. Monkey shares, of course. It's too much food, even for this self-proclaimed garbage disposal.

I leave you with a 2002 review from The New Yorker penned by true New Yorker Nora Ephron (writer of When Harry Met Sally):

The hot pastrami sandwich served at Langer's Delicatessen in downtown Los Angeles is the finest hot pastrami sandwich in the world. This is not just my opinion, although most people who know about Langer's will simply say it's the finest hot pastrami sandwich in Los Angeles because they don't dare to claim that something like a hot pastrami sandwich could possibly be the best version of itself in a city where until recently you couldn't get anything resembling a New York bagel, and the only reason you can get one now is that New York bagels have deteriorated.
The resulting sandwich, slathered with Gulden's mustard, is an exquisite combination of textures and tastes. It's soft but crispy, tender but chewy, peppery but sour, smoky but tangy. It's a symphony orchestra, different instruments brought together to play one perfect chord. It...is, in short, a work of art.

Rest in peace, Al. Thanks for making so many mouthwatering lunches possible.
Bananas Unpeeled by weezermonkey at 11:21 PM