Bags have been checked. Gone through security. Now I'm sitting on the floor next to an outlet for one last report in the U.S. before we fly to Santiago, Chile. (I don't have my iPhone, but Mr. Monkey does, and, yes, we brought the laptop, so you will be able to experience our trip with us the next 17 days!) 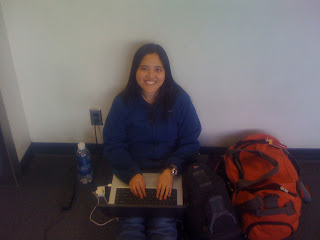 Brother Monkey graciously agreed to drive us to the airport. He and Torry came to our place, and then we headed to Tiara Cafe for an early lunch. We got there around 11ish, and it wasn't really open until 11:30, but, luckily, Fred Eric (the super-duper creative mind behind Tiara) remembered I was a friend of Curly Fries, gave me a big hug, and sat us down.

We dined on chickpea fritters, winter bubble bread, a red pizzette, andouille corn dogs, three different freshwiches, and the Monkeys' perennial favorite, the duck medianoche presswich. Everything was washed down with fresh pomegranate lemonade or accompanied by a pot of hot tea. I'm glad we got to see Brother Monkey and Torry before we left. Totally a great way to bid America adieu!

There was one wrinkle, though. Poor Brother Monkey got a traffic ticket when making an illegal U-turn, which particularly sucks because he got another traffic ticket not long ago. That first ticket was, in fact, the first of his life, not unlike my own recent traffic ticket. Torry got a ticket recently, too! 'Tis the season for tickets in the Monkey family, it seems.

I felt really bad about Brother Monkey's ticket because I was definitely partially to blame. I plan to pay for it when we get back. But for the fact he came to drive us to the airport and but for another parking suggestion of mine, he never would've gotten the ticket! Boooooo!

The guy is blaring over the loudspeaker now. Only 10 more minutes until boarding!
Bananas Unpeeled by weezermonkey at 1:41 PM