I brought my case file home with me last night to go through the whole thing yet again in preparation for my conference before the commission. I also woke up earlier than usual this morning because I wanted to get to the office in time to do some final review. I zipped down the highway and pulled into my company's parking lot. I even rejoiced at getting a pretty good spot.

And then I realized I'd left my case file at home.

There was nothing else I could do. I revved up Big Red, peeled out of the parking lot, and flew down the streets to the freeway.

And then I saw flashing lights behind me.

I pulled over. The cop informed me that I was doing 40 in a 25 zone -- a construction zone and school zone, no less.

I burst into tears. Maybe waterworks would help me get out of the ticket. Nope. I told him I was really late for a hearing. "You're late for work? Don't worry. This won't take too long." I wanted to spit in his face. Of all days, today had to be the day that I got my first ticket in my life.

As I composed myself and wiped away my futile crocodile tears, my iPhone rang. Mr. Monkey! "I'm coming over with the file now! Don't worry! I'll be there soon! I know you already know the case even without the file. Take a deep breath. Everything is going to be ok." Mr. Monkey is the greatest.

I drove back to work and did my best to prepare while waiting for Mr. Monkey and my file. I then gave myself the deepest paper cut ever on my right index finger while flipping through papers galore. Red dripped all over my papers. Argh.

Then I got the awaited phone call. Mr. Monkey and the file were here! After all this, I still had one hour left before the conference. Phew.

At the designated time, I called in. (It was a telephonic hearing.) I waited and grooved to the lame music on the phone on repeat. (Hey, my door was closed, and I'd had a rough morning up to that point.) The judge came on the line, and I stated my appearance.

Not a word from plaintiff.

We waited another 10 minutes.

The judge then attempted to call plaintiff. No dice. We did the conference without him. I was pissed. PISSED. I'd fretted and gotten a ticket and literally bled for this stupid conference.

And it didn't mean a damn thing.

The conference went well enough. I can't believe I got all worked up over this. After this harrowing morning, I was ecstatic to go to lunch with Glam, Bax, and K. No exaggeration. Ecstatic!

Siam Sunset on San Gabriel was our destination. Yum! So perfect for a rainy day! So perfect as a post-crappy-morning pick-me-up! The food was almost as good as the cheerful company! 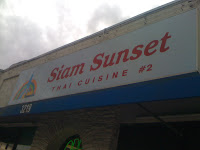 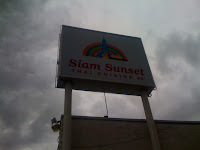 The tom kha gai was a warm combination of sourness and spiciness. I don't even like coconut, and I love tom kha gai! I was very happy as I slurped up my soup. 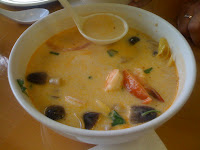 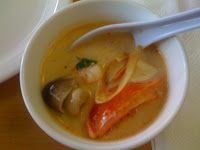 The larb was delectably spicy and refreshing. It's a chilled dish of minced meat with onions and other spices. Glam remarked that the mint really made the dish. We also had two other staples: shrimp pad thai and pineapple fried rice. All tasty. And all for just $9 per person. 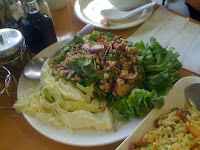 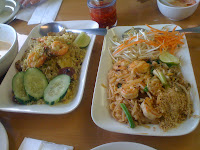 The rest of the afternoon sort of flew by. And, before I knew it, the clock struck 5. I blazed out of the office only to be drenched by a dreary deluge. Good thing I had my Paul Frank umbrella and some crappy Ann Taylor heels.

I drove downtown, picked up my pals BPLJ and Pescado from my old firm, and headed to Water Grill. Dinner was on them. Why? Because it was "business development." Whee!

As usual, my boys were hilarious. They even brought me firm swag, including an organizer with their contact info already written in. That made me laugh so hard.

BPLJ and Pescado started with sting ray oysters on the half shell ($16.50). BPLJ especially loved them. (Note that the Monkey is not a fan of bivalves, which are not to be confused with bipeds, which, of course, this non-cannibal Monkey also does not eat.) 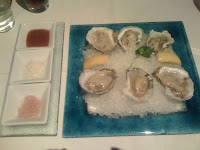 I had the blue and dungeness crab cake with harissa, herbed couscous and yogurt-lime-cucumber sauce ($19). My crab cake was meaty and substantial and yummerific. Both BPLJ and Pescado opted for the white chowder with Manila clams, Weiser Farm potatoes, Niman Ranch applewood smoked bacon ($14), and they were tempted to lick their bowls. No joke. 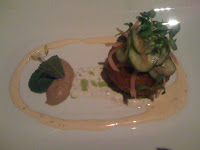 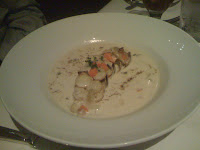 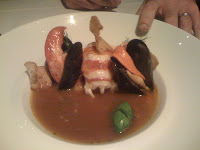 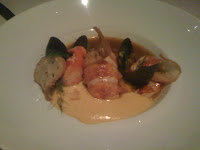 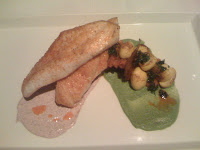 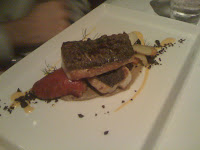 We all enjoyed our entrees very much. 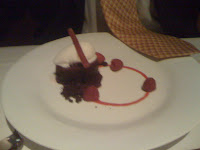 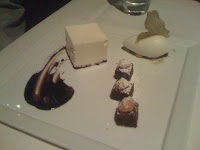 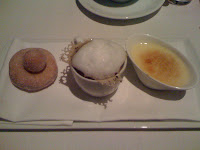 The red velvet pudding was like a sweet warm cuddly friend in my mouth -- better than any red velvet cupcake I've had in Los Angeles. The white chocolate mousse dish was mellow and smooth. The creme brulee collection was scrumptious and very creative.

Heavenly. All.
Bananas Unpeeled by weezermonkey at 11:59 PM