A number of my co-workers invited me to a "car wash lunch" yesterday. I accepted before asking, "What's a car wash lunch?" It turns out a car wash lunch is when you go to The Hat while your car is being washed across the street. How very efficient!

I'm used to being the only girl amidst boy co-workers, but I invited Giggles along for extra company with the six boys. We piled into four cars and set out to get our wheels some sudsy baths.

The Hat is not food for the health-conscious. Taking that into consideration, my motto when I go to The Hat is "Go Big or Go Home!" I ordered a huge platter of chili cheese fries with pastrami on top. Just like In-N-Out, The Hat has a not-so-secret menu. The Hat's not-so-secret menu is even less secret. Basically, you can put pastrami on anything at The Hat. Anything. See? 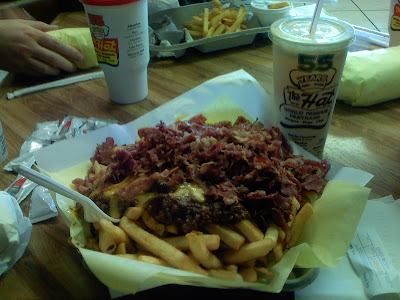 One co-worker remarked, "Dude. Monkey doesn't mess around." Another posited, "That thing could feed a family of eight. For a week."

But these comments were nothing compared to the reaction I got from about a dozen people waiting in line.

When my order was called, I approached the counter, picked up my chili cheese fries with pastrami and a medium Orange Bang, and turned around to go to our booth. I heard a number of "whoas" and "wows" from the crowd, and then a man started clapping. And another. And another. In a matter of seconds, everybody in line was applauding my monstrosity of a lunch.

I curtsied and bowed, while I carefully balanced my literally very heavy meal, and laughed all the way to our table. For the record, I only ate about an eighth of this and packed the rest up, but that standing ovation made my day.
Bananas Unpeeled by weezermonkey at 10:26 PM

Email ThisBlogThis!Share to TwitterShare to FacebookShare to Pinterest
Labels: sandwiches