As you know, I started a new job in December, and so far it's been treating me quite well. This job affords me rather interesting opportunities to get out of the office.

On Friday, I had quite the adventure driving and wading through miles and miles of tunnels. Some people would find the experience harrowing, but I say that anything is better than sitting at one's desk (especially when the computer on said desk is prohibited from visiting any sort of fun on the Internet).

Without going into the details of the case, I can tell you that I went to the tunnels for the first time about a week prior to Friday's visit (it was the Thursday I went to the Murakami exhibit with Jen and tater). That Thursday, I scouted the tunnels to confirm what I'd be showing opposing counsel on Friday. 'Twas a blast. I had such a great time in the tunnels during my first visit! My initial Thursday visit went off without a hitch. No sweat.

Friday was the day I accompanied opposing counsel and plaintiff through the tunnels. Friday was a whole different world.

Let's start from the very beginning, a very good place to start. (If you sang this in your head, word!) I woke up at 4:30ish a.m. to drive to these tunnels 130 miles away. Thank God I get to expense this mileage. That's 520 miles in two days, not to mention I nearly killed myself several times, due to early morning fog (I felt like I was going through a cloud) and driving up and down perilously winding roads with a severe blind spot.

I had breakfast at Starbucks while I waited for Pops. I did not eat the BlackBerry. 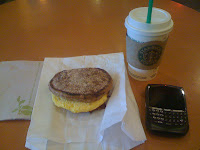 Pops is the grandpa-like engineer who is our main contact on this case. He is so great in so many ways, as you will discover in this post.

Pops and Young Engineer Dude ("YED") met me shortly after I grubbed. Then plaintiff and opposing counsel (together, the "Enemies") showed up, and we drove up to the forebay, where we all put on the necessary gear. Sexy. 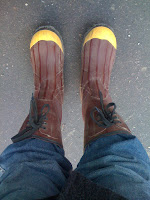 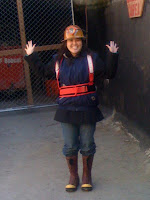 Being inside a very dark, very long tunnel gives a whole new meaning to "the light at the end of the tunnel." I saw a few drowned rats on the tunnel floor and spiders the size of my hand scurried up and down the tunnel walls. 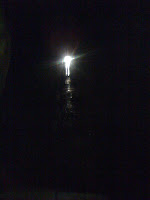 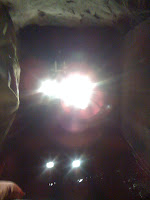 We rode two electric carts through the tunnels. It was sort of like being on the Indiana Jones ride at Disneyland, except colder. A lot colder. I had a t-shirt, wool sweater, fleece vest, wool coat, and gloves on. Still cold.

On our way back out, our cart stopped. It just ran out of juice. Dead.

YED drove the Enemies back to daylight first on the functioning cart. Pops and I hung back on the dead cart. We managed to get it started a few times and walked a bit and rode a bit. Finally, we reached an open-air flume between two tunnels and decided to park our cart and wait there for YED to come back for us.

Pops gave me a See's Candies lollipop, and we both sat there waiting with little white sticks hanging out of our mouths. We sat for a long time. Mind you, it'd been hours since my breakfast at Starbucks. I couldn't hold it in anymore.

"Pops, I really really need to go to the bathroom."

Pops smiled, reached into his jacket, and gave me his pocket pack of Kleenex. "There are miles and miles of dark tunnels right behind us and ahead of us." We both laughed. I took the tissue and trudged through the tunnel tunnel behind us, wading through several inches of water and maintaining my balance while holding an enormous flashlight and adjusting my headlamp.

How far did I have to go in? I didn't want Pops to hear me, but, then again, I didn't really want to be alone in the dark with the rats and spiders either. I ended up not walking in that far. I bet Pops could totally hear me tinkle. I didn't care. He really is like a grandpa with his butterscotch suckers and tissue pocket pack. I turned off all my lights. Pops had his back to me, but it just felt better to pee in the dark.

After I emptied my bladder in the tunnel, I sheepishly sloshed back to the defunct cart. It was sort of gross that I walked through my own pee, and the tissue was basically still perfectly folded and floating atop my pee after I used it. TMI, TMI, TMI. When I handed Pops his pocket pack, I said, "Thank you so much. I feel a whole lot better." We laughed some more.

Not long after, YED came to our rescue, and he and Pops loaded up the good cart with all our gear from the bad cart. Then back into the tunnels we went. 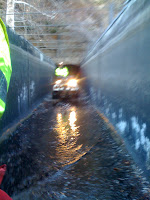 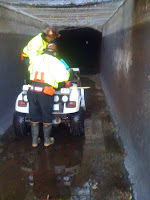 I emerged from the tunnels to meet the Enemies. What a pair of assholes. I really wanted to drive them back and push them face down in my tunnel pee. Instead, I just called them stupid without actually calling them stupid. This involved my telling them that their jurisdictional issues were ones that we all learned about our first semester of law school. I believe I used the term "Civ Pro 101." Opposing counsel was miffed. Pops got a real kick out of that. He, YED, and I had some good chuckles over this during our post-tunnel lunch.

I'm going cream the Enemies. They are total jerks. I can't wait. I didn't feel this strongly until they were so rude to me on Friday. Now they've really asked for it. People should know better than to anger me. Angry Monkey is Scary Monkey! Grr!
Bananas Unpeeled by weezermonkey at 11:50 PM