New Year's Eve With The Donnas

The Monkeys made a short trek to Orange County last night to see Brother Monkey's girlfriend and her band, The Donnas, play at Carnivale 2008.

Have you ever been to Coachella? Now imagine all those freaky vendors, side performers, and activities but on a smaller, even freakier scale and also aged significantly. That was what Carnivale 2008 was like, minus the cool factor.

Check out the amateur flame-throwing couple. They asked a woman from the crowd to stand between them as they tossed lit torches at each other, which they kept dropping. I felt so bad (and scared) for the hapless volunteer caught in the middle of flame-throwing incompetence. 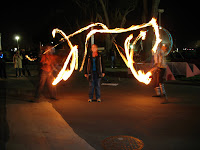 Here are my free glamorous glow-in-the-dark bracelets and the awe-inspiring New Year balloon that soared above all the festivities. 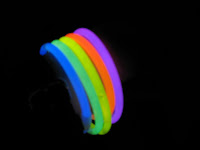 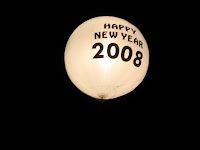 All kidding aside (yes, that was kidding above), the Monkeys had a great time last night because we went there for one purpose -- to see Torry and The Donnas. 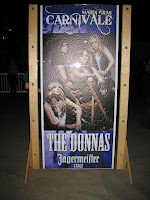 Unlike at other shows, we were actually able to get right up front, which was a real treat. The Donnas were energetic, in perfect sync, and downright lovable as they tore up the stage. 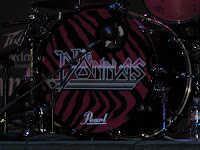 Brett is the perfect frontwoman, always a crowd favorite and bursting with energy. 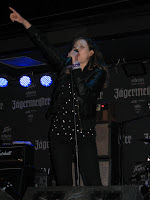 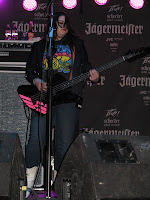 Allison is freakin' incredible -- an amazing guitarist who shreds like no other. 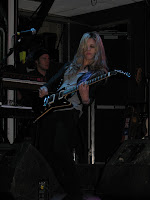 And then there is our dear Torry. Oh, how we love Torry so much! Poor little Torry has been extremely ill the past few days, but you wouldn't have known it watching her drum. Look at that hair fly! 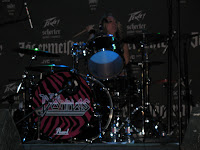 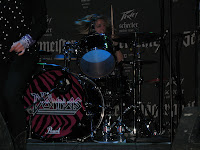 Someone in the crowd was so inspired by The Donnas that she threw this at the stage. Perhaps "inspired" is not the right word. 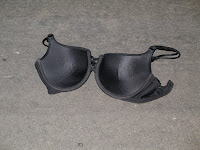 In any event, this thing was gigantic. I'm disappointed there's no point of reference for size comparison, but the bazongas held by this contraption were probably as big as my head.

After The Donnas played, we hung out for a little bit backstage. (For the record, "backstage" was a giant concrete-floored metal barn-like thing. We joked that it probably houses animals at 4-H competitions.) Then we went back out to watch Louis XIV play a couple songs. 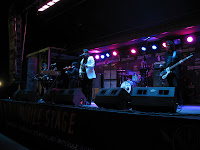 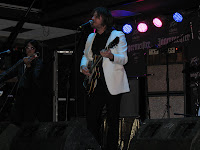 After that, some of the women from The Real Housewives of Orange County got on stage to count down to 2008. Oy vey. 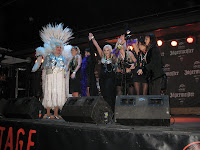 At least there were fireworks to distract us from all the plastic noses and boobies. 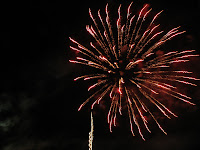 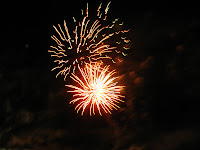 Then, being the old fogeys that we are, we bid adieu to Brother Monkey, Torry, and The Donnas and headed back to our room at the Hyatt Regency Irvine ($67 -- thanks, priceline) for a good long sleep in a big warm bed.

I woke up this morning really late. Mr. Monkey had been awake for hours already, watching football on mute with closed captioning and surfing the Internet. When I finally rose, I was about to hop into the shower when suddenly I heard the fire alarm and a recorded voice blaring over the loudspeaker:

Mr. Monkey poked his head out the door, came back in, and said, "I don't smell any smoke." And I proceeded with my lovely hot shower, while The Attention Please Man continued to warn me about a nonexistent fire.

By the time I'd wrapped myself in a fluffy white towel, a different non-recorded voice overrode the recorded voice to inform us that it was a false alarm all along. Yay for not heeding fire alarms! Our blatant disobedience paid off! We laughed at the hungover schmucks who went outside with bedhead and their pajamas.

After we checked out, we joined Brother Monkey, Torry, Brett, Maya, Allison, and Joey (their manager) for breakfast at Jerry's Famous Deli, which was just across the street from The Westin South Coast Plaza, where they stayed last night. I had the Louisiana Spicy Scramble. Yum. 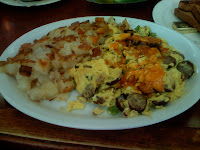 We sat closest to Brett. We had a fun conversation with her about various topics from homemade pickles to the Murakami exhibit, which she's gone to see twice already. Brett is extraordinarily friendly. I think she could talk to any person and make that person feel right at home. Everyone was so nice, and it was a swell way to start 2008.