Actually, the Monkeys were total party poopers who left early, but we made a valiant effort on a Tuesday night. Today is Torry's and Maya's birthday (same year, even), and we had the pleasure of celebrating with them.

Before the Monkeys went to their little birthday shindig, we had a late dinner at Fred 62. I don't care that a lot of people claim not to like Fred 62. They are liars! They simply can't admit that a popular place is yummy. I love Fred 62. 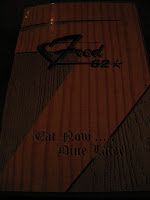 For those of you unfamiliar with Fred 62, it's a 24-hour diner in the heart of Los Feliz. "Fred" is none other than Fred Eric, the same man behind Tiara Cafe.

Fred 62 is where I first had fried mac 'n' cheese. I fell in love with Mr. Eric's signature whimsy instantly. The food is not only delicious, but so are the dishes' names. And where else can you find busboys with t-shirts emblazoned with the slogan "Lesbians Eat Out"? 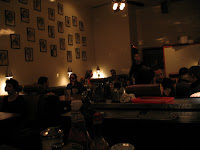 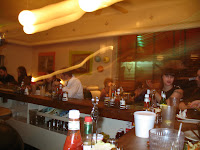 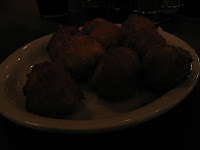 We followed the golden goodness with the Juicy Lucy Burger, served medium rare on a toasted bun. It's truly a burger done right. 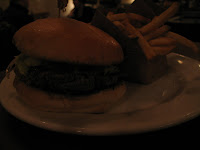 We chased our burger with the Thai Cobb Salad. I know you are looking at me funny right now for ordering salad at a greasy spoon (even though it's a more upscale greasy spoon), but this was no ordinary salad. The Thai Cobb is comprised of spinach, shredded chicken, bacon, tomato, chopped egg, peanuts, green papaya, fried wonton strips, and spicy Thai dressing. The best part, though, is its perfectly square presentation. 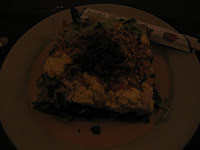 After Fred 62, we headed to the Maya-Torry Double Birthday Party at the Red Lion Tavern (2366 Glendale Boulevard, Los Angeles), a kitschy little bar in Silver Lake. If you ever have a burning desire to hang out in a German pub, this is the place for you! 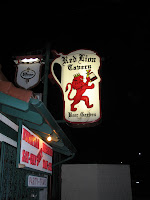 Amidst schnitzel, spaetzle, and lederhosen, good times abound. We had the upstairs room and bar to ourselves. Brett and Allison blew up balloons and scattered noisemakers and poppers. Mr. Monkey blew up a few balloons, too. A "feliz cumpleanos" sign hung on the wall. 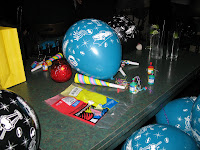 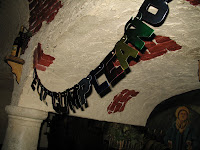 The party attendees included striking writers (friends of Brother Monkey) and rocker types (friends of Maya and Torry). I daresay Mr. Monkey and I were quite possibly the only two people in the room with "normal" jobs (hence our pathetic 11ish p.m. departure), but we enjoyed about two hours of fun.

We had a fun chat with a little blonde spitfire named Kelly. She regaled us with tales of her unsafe neighborhood and her morbid hobby of perusing local homicide blogs to stay on top of the killings near her apartment. We asked her what she does for a living, and she told us she's in a band called The Dollyrots.

We Googled when we got home, and we totally recognized their very catchy song "Because I'm Awesome." It's in a Kohl's commercial! (Kelly is the curly blonde in the television set at the beginning and in the crowd at the end.)

The actual music video for "Because I'm Awesome" is a spoof of American Idol. The Monkeys' hearts belong to The Donnas, of course, but talking to Kelly was pretty...awesome. (Come on. You knew that was coming.) Really cool girl!

Of course, I must include pics of the birthday girls, who indeed partied like rock stars. Well, I guess, in this case, they are rock stars. 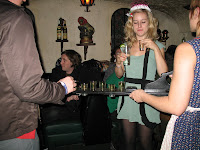 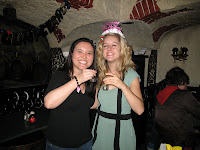 Birthday Girl with Brother Monkey (who is still in no-smiling-for-pictures mode). 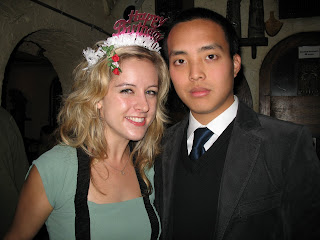 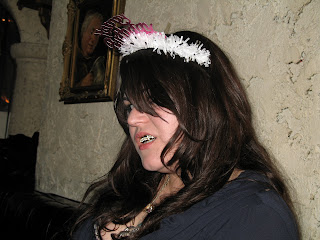 P.S. For those of you stumped by yesterday's post re Foxboro Hot Tubs, the [imaginary] prize goes to Keren, who correctly guessed FHT's alter ego, Green Day! Good ear, Keren!
Bananas Unpeeled by weezermonkey at 11:58 PM