All Taste Same and Rainy Game

The last time I spoke of Di Pilla's, I didn't provide any pictures, so I'm redeeming myself today. 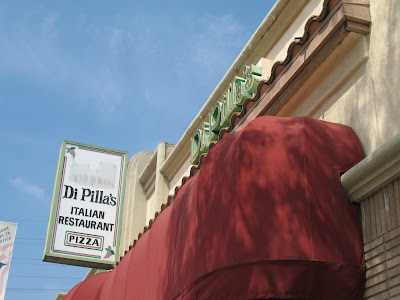 Di Pilla's hasn't changed since the last time I ate there. It wasn't very long ago after all, so I won't drone on with details. I'll just say this -- the restaurant has basically one kind of bread and three different sauces. The complimentary bread tastes the same as the pizza crust, and all the pasta items are simply different shapes smothered with the three aforementioned sauces.

All taste same, if you will.

[For those of you unfamiliar with my infamous "all look same" battlecry, enter the exam room and tell me your score.]

What was I talking about? Oh yeah. Pictures of mediocre "Italian" food. The quotation marks are intentional and necessary. 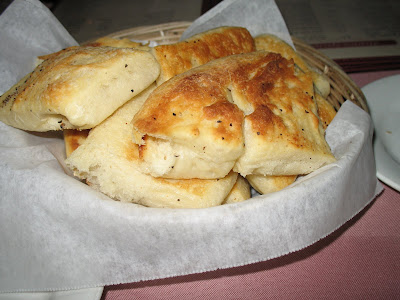 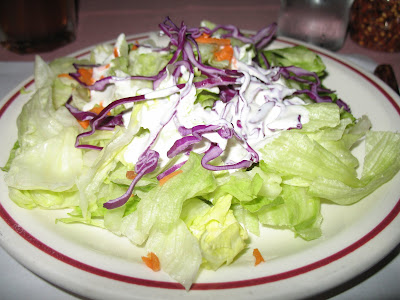 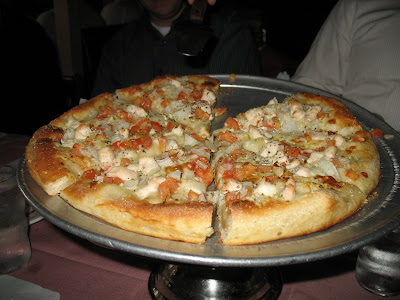 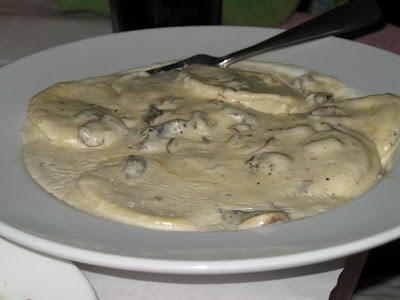 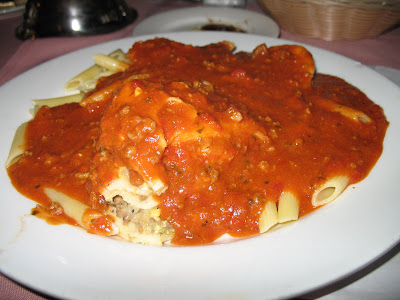 Notwithstanding the unremarkable food, lunch was a blast. I sat next to C-3PO and R2-D2 (sorry, guys, these are your names until I think of something more fitting to your individual personalities). My new droid friends are two guys whom I often see together. One is tall, and one is not so tall. The are both funny and good-natured.

Hmm. Maybe I like the names C3-PO and R2-D2. We shall see. I will have to get to know them a little better for this. (Are you reading, droids? This is your call to have lunch with me more often!)

My fellow law school alum sat across from me. I haven't figured out a name for him either yet. Names are very important to me. And this guy needs a really good one because he is my commercial litigation buddy. This will require some thought.

In any event, 'twas a good time -- lots and lots of laughs.

It must be noted that Bax, Purell, and I had the pleasure of riding in Glam's swanky new Infiniti SUV. Sleek. Quiet. Roomy. I enjoyed inhaling that unmistakable new car smell. 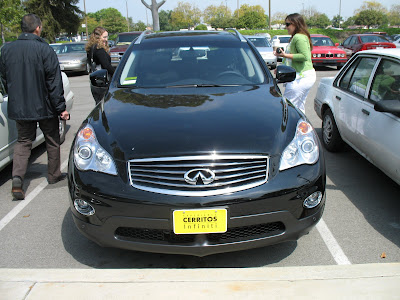 I also enjoyed laughing at Purell's endearing oddball comments. He is everybody's favorite germophobe. And, apparently, according to Glam, he has a physique that women love. This, my dear readers, would take too long for me to explain, but just know that Bax and I were snorting in the backseat over this. We also had quite the gigglefest listening to Glam's profanity-laced, sex-ridden Akon CD, an ill-fated purchase originally intended for her five-year-old son.

A few hours later, I was done with work and off to Dodger stadium again. What a difference a day makes -- check out the view from our seats tonight. Not quite nosebleed, but pretty high up. However, their location behind home plate made up for it. 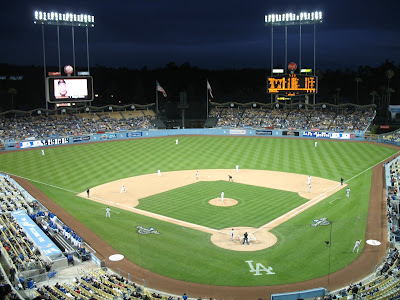 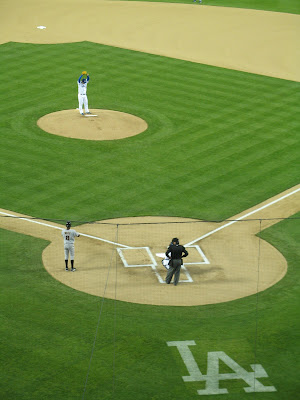 Little Monkey Niece and her parents joined us tonight, along with Brother Monkey again. 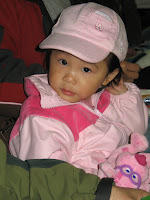 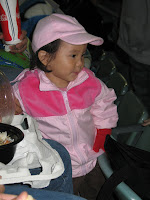 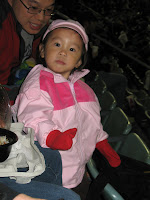 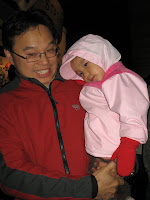 Since we were in the Reserve level today (i.e., the third-level blue seats), we didn't have nearly as many concession options. What the hell? Plebeians aren't worthy of slightly tastier fast food? Boo to you and your elitist ways, Dodger stadium. Boooo!

We ended up getting some Dodger dogs, a Western Bacon Cheeseburger from Carl's Jr. (don't let that "Double Western" wrapper fool you; it was a single, I swear), and a churro. 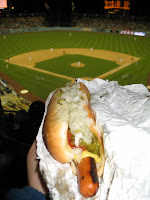 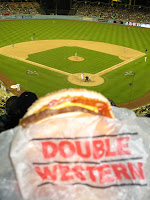 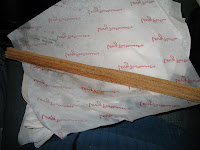 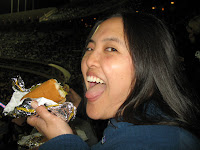 Having gone to the game last night, we were bundled up very well, and we all had quality rain gear on, too. It's a good thing that we did. It poured...so much so that there ended up being a rain delay that lasted an hour and 13 minutes.

It was the first time I'd ever seen the grounds crew come out with tarps live. 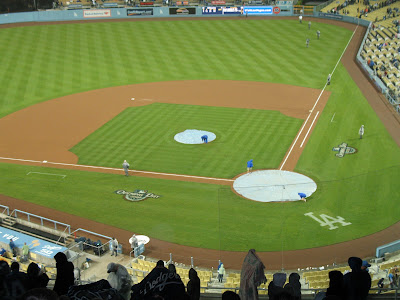 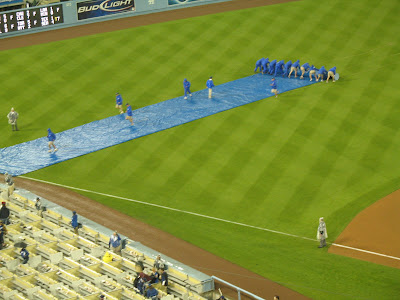 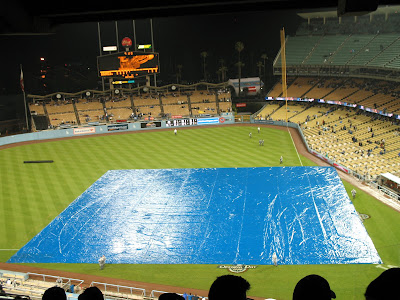 I found it an interesting experience for about 30 minutes or so. Then I decided it was time to go home because I have a case management conference at 8:30 a.m. tomorrow. Lucky for me, both Mr. Monkey and Brother Monkey obliged (LMN and family had departed far earlier). We left around 9:30ish. The game resumed shortly after we got home. The seventh inning stretch didn't happen until 10:45 tonight! I'm really glad we didn't stick around.

The Dodgers lost. What a wet wet mess.