We went to our first Dodger game of the season tonight with Brother Monkey and his friend, dak, who bears such a striking resemblance to Jordan Bratman that he was once approached at Subway and asked if he was the Mr. Christina Aguilera. 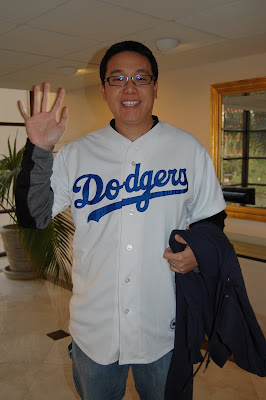 We sat on the Field Level (i.e., the yellow seats down on the field), where all the concession stands have been remodeled. 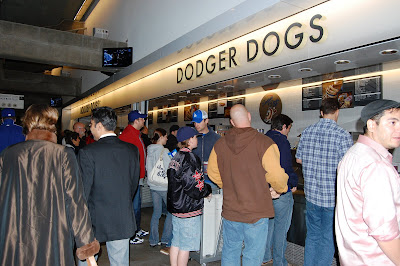 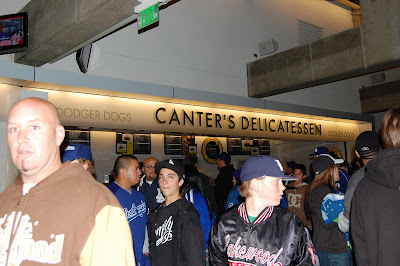 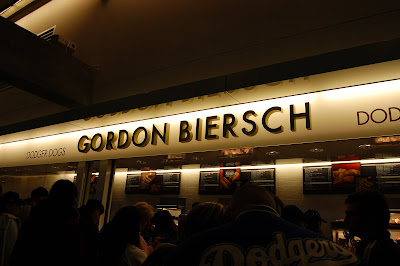 Some sights from our seats. 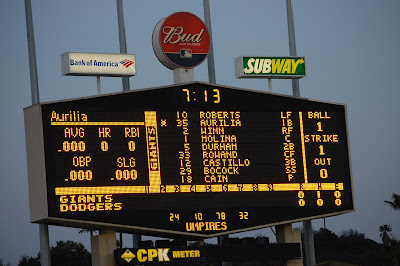 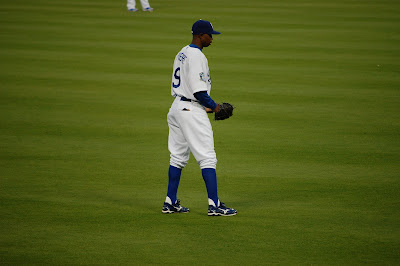 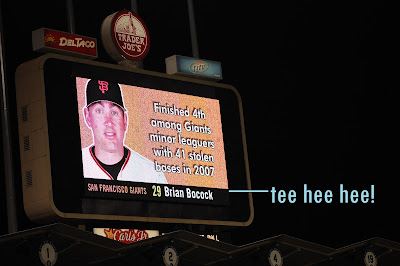 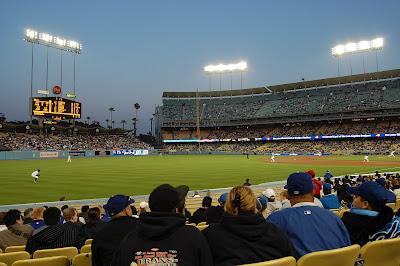 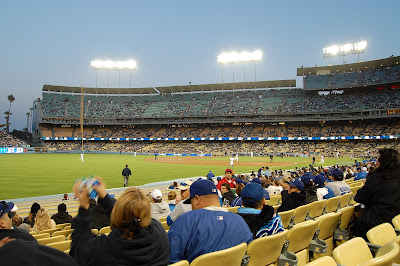 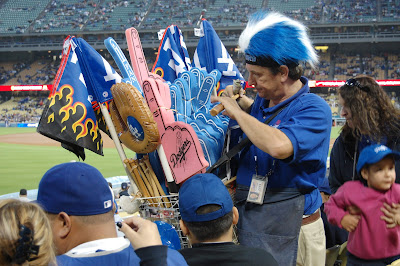 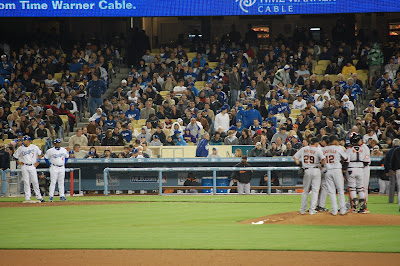 And then there was the glorious food.

My mess of an Italian sausage with mustard, ketchup, relish, and onions. 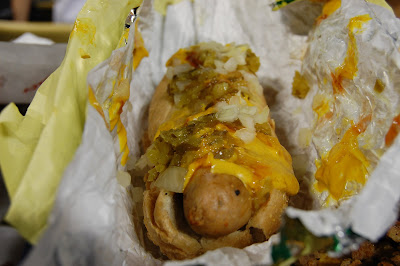 Gordon Biersch garlic fries swimming in five-napkin grease. Why "five-napkin," you ask? That's the number of napkins it took to soak up that pool. Brother Monkey and Mr. Monkey ate most of this. I couldn't bring myself to eat much after snapping the photo midway. 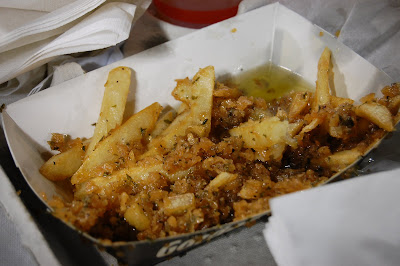 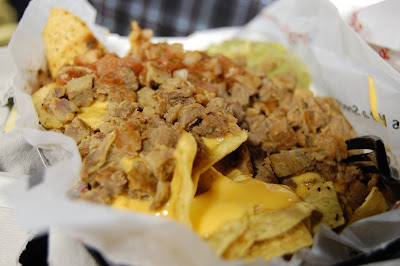 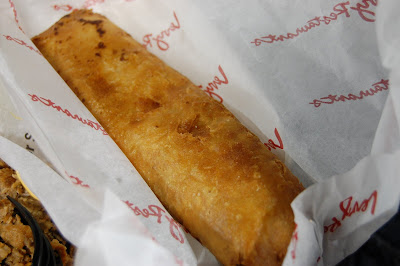 Ruby's Diner tri-tip sliders, which came with a side of horseradish and au jus. These were delicious little meaty juicy presents for my tummy. Pretty awesome for ballpark food. 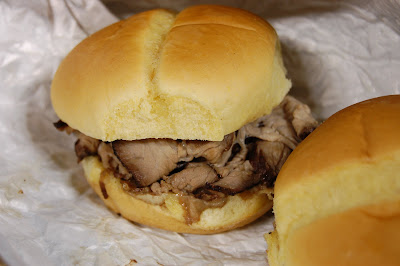 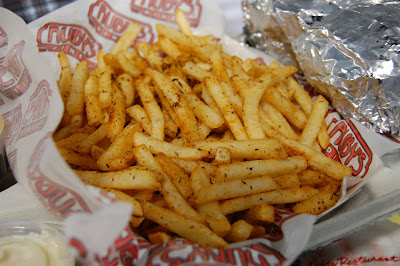 The game was tied 0-0 for the longest time. In the sixth inning, things got shaken up when third base coach Larry Bowa went nuts after a call by the umpire. I'd never seen such a heated argument live at a baseball game. Bowa was ejected! Exciting! Sadly, I had my hands (and mouth) full of food, so no pics.

The Giants scored two runs at the top of the seventh to break the tie, but then the Dodgers tied it up again at the bottom of the seventh. We sat and shivered, wondering how much longer the teams would remain tied. I'm going to wear warmer clothing tomorrow night. Yes, we're going again tomorrow.

We were thrilled when closing pitcher Takashi Saito came in. Yeah! 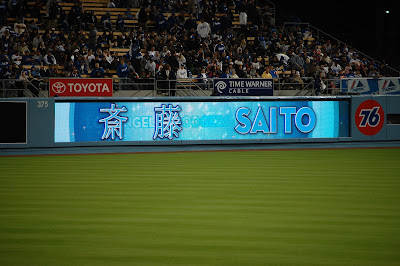 Saito slayed the Giants at the top of the ninth, setting the stage for a Dodger win. (Ignore the person's head in the lower right corner of all my Saito pics. Boo!) 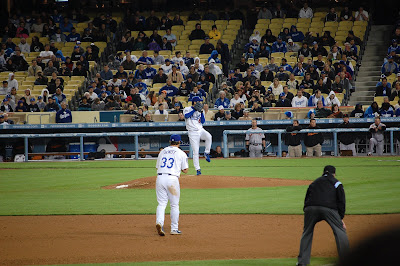 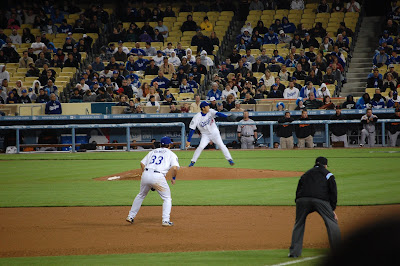 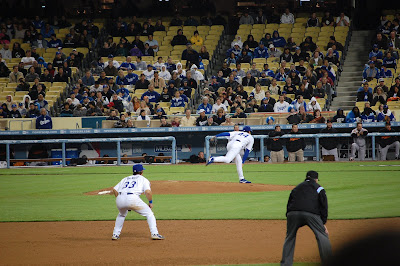 Rafael Furcal scored on Delwyn Young's awesome infield hit for a winning score of 3-2. The crowd and team went wild! 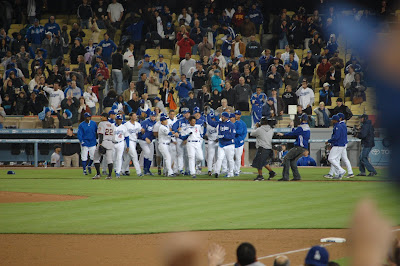 The end [at which peanuts were thrown by the guy beside us]. 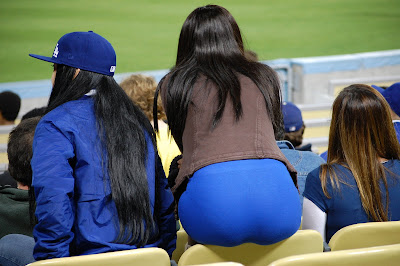 At least she wore blue.
Bananas Unpeeled by weezermonkey at 11:59 PM