Back to Reality. Almost.

In an hour, the Monkeys will be heading to Night Two of KROQ's Almost Acoustic Christmas at the Gibson Amphitheatre. I'll probably go right to bed when we come home because tomorrow is my first day at my new job. No immediate recap! Sorry, loyal readers!

In the meantime, here's what we ate for lunch -- sopes (con al pastor) and tacos (carnitas, carne asada, y pollo) from King Taco. (We were in the neighborhood again to return my movies and for more movies.) 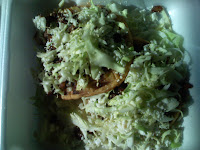 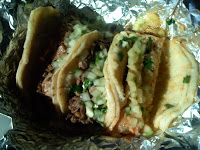 Mr. Monkey had a carnitas burrito, too. The boy has the greatest metabolism.

And, yes, we had Mexican again. I don't think I could ever live somewhere other than Southern California. Mexican food elsewhere just pales in comparison. Well, maybe except for Mexico itself. I had some "Mexican" food at Rosa Mexicano in NYC once, and it sucked ass. Poor New Yorkers, thinking that crap is good.

I'd better grab my earplugs now. Don't want to start the new gig temporarily deaf. "Huh?" "What?" Yeah, that would go over really well.
Bananas Unpeeled by weezermonkey at 4:29 PM