I woke up at 9:30 on this last day of leisure. My new job starts Monday. I feel both dread and excitement. How could I not feel dread after these two relaxing weeks? My pal JLK said it best in a comment on Day Seven:

The time off between jobs is the only adult equivalent of summer vacation: truly nothing hanging over you. It's so cool.

It is cool! Unless you're in school, you just don't get breaks like this!

Around noonish, I got a call from my former assistant, who asked if I'd like to go to lunch at 12:30. Yes, I would! I was wearing sweats and had unwashed hair, so I threw on some jeans and a headband and, within 15 minutes, I'd jogged to SanSai to meet my two former assistants from my first firm. I'll call them the M&Ms.

The M&Ms are the most thoughtful, kind, and competent (extraordinarily competent!) secretaries I've ever had. Both assisted me during my first three years of practice, and I love them to pieces. One M has a daughter in college and a daughter in high school. The other M has two sons about my age. (This M was also BPLJ's and JLK's former secretary.) They taught me so much, and they treated me like their own.

Beyond a mere working relationship, I consider them my good friends, and I don't know how I could've survived life as a baby lawyer without them. I always felt like I had a kind cousin or aunt looking out for me. And that was a good feeling to have in a big cold law firm.

Sometimes I think of the inevitable stupid mistakes I made during those beginning years, and I laugh and shudder at the same time. Both M&Ms saved me a number of times, and, on other occasions, they offered me their shoulders to cry on or gave me much-needed hugs. I am sad that my new job probably won't allow me to see them as often as I did when I worked downtown.

Along with good conversation and a dose of gossip, I had grilled teriyaki salmon accompanied by brown rice and mixed greens. 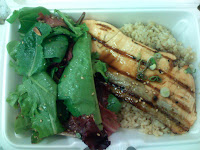 Then, as she often does, M-With-Two-Daughters gave me a Paul Frank accessory! She is so incredibly generous and always looking out for cool Paul Frank stuff for me! It's a limited edition Andy Warhol collaboration bag! I think it will be perfect for travel makeup or maybe pens and pencils. 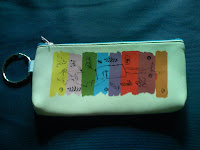 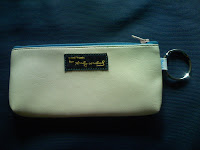 After lunch, I walked home to see our condo lobby decorated. It's beginning to look a lot like Christmas! 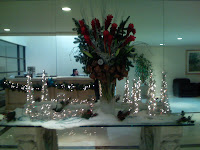 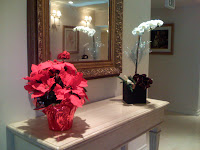 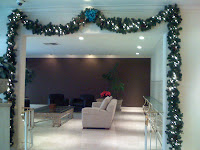 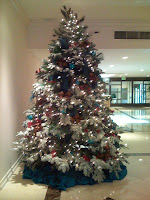 I snapped these pics, went up the elevator, and began my afternoon as a lazy-hermit-couch-potato. I played on the Internet and watched several hours of I Love the 80s 3-D on VH1. My ass got bigger by the minute. Go, ass, go!

Hours later, it was time to eat again! What a life! The Monkeys returned my movies from yesterday and got some more. (Gotta love Blockbuster Online!) Then we went to the nearby El 7 Mares, which is a local Mexican restaurant chain that specializes in seafood (duh, it's The Seven Seas). 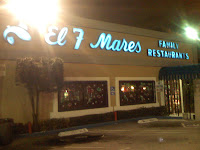 The location on Cesar Chavez Avenue has a stand that is separate from the sit-down restaurant. We got our food from the stand to go. 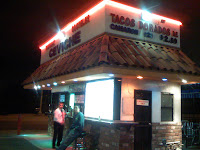 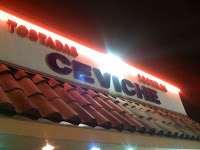 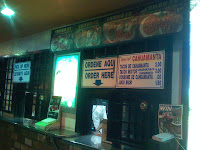 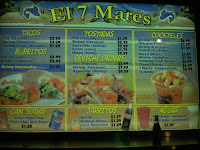 The Monkeys shared some shrimp empanadas (we ordered two, and they gave us three), a fish burrito, and mixed ceviche tostadas. 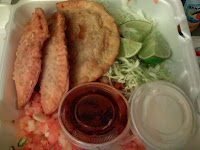 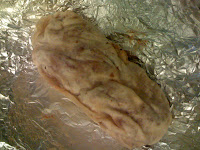 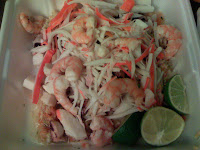 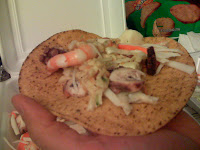 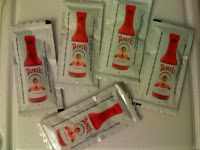 El 7 Mares isn't out-of-this-world-phenomenal, but I rather like it because it's fast, cheap, and fresh, and the people who work there are friendly. This is why we alternate between this place and King Taco when we go to Blockbuster.