Noisy With a Capital "N" 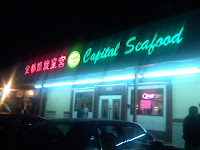 She picked this restaurant mainly for one reason, which you will see later. I wasn't terribly impressed with the first few dishes, but dinner got better as the night went on, even if the neighboring wedding reception got worse.

Ah, yes -- the great phenomenon of the Chinese wedding banquet. Right next to our table, separated only by small portable dividers, was a horribly loud wedding reception with even more horrible singing. Singing! Loud! Off-key! Awful! There seemed to be a free-for-all karaoke machine. Bad idea. All restaurant patrons not at the wedding reception were laughing hysterically and/or grimacing the whole time. We were a laughing table, if you couldn't guess.

Brother Monkey was actually brazen enough to walk through the divider, sit at an empty table, and peruse the menu. All look same! No one raised an eyebrow. He was wearing a nice blazer. Blazer = access. Brother Monkey reported that the menu wasn't all that, and the decorations were ghetto.

Check out the place and the getaway car. Gawdy City! (Brother Monkey's temporary wedding crashing gave me courage, too.) 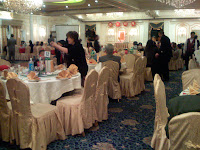 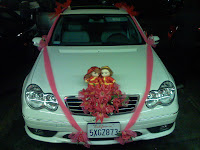 It's times like these that Mr. Monkey and I are especially happy that we stood our ground when it came to our wedding. This is exactly the scene that Mr. Monkey's dad wanted for us. No! No! No!

Back to our dinner. The first thing we had to eat was something called Golden Buddha Soup. My mom and grandma explained that it's filled with so many different delicious meats that Buddha, who is supposed to be a vegetarian, leaped over a wall to get to this soup because it was so phenomenal. Sounds awesome, right? Check it out. 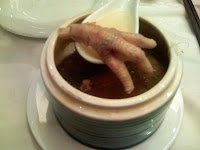 Aaahhh! Actually, it's not that shocking to me, but I thought some of you out there would be freaked out by the chicken foot. I had two in my bowl. Brother Monkey says eating this feels like you're eating a tiny baby's hand. There's a reason he gets paid used to get paid to write.

Next up were three rather unmemorable dishes: pork ribs, beef ribs, and bok choy. Meh. 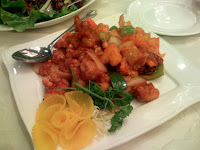 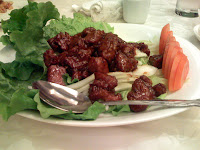 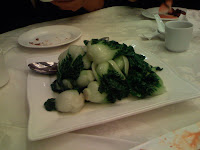 Then dinner got better with the arrival of Peking duck. Always a treat. 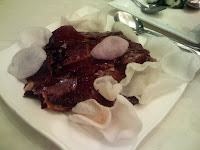 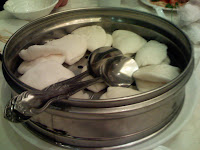 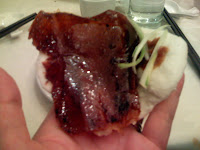 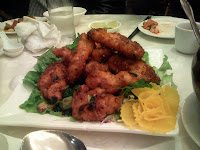 And lobster with noodles. Excellent, especially the noodles. 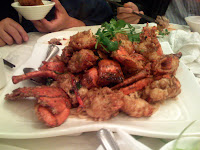 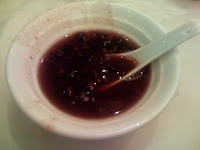 And then came the reason for Mama Monkey's selection of this restaurant. More Smurf houses! The ones we had on Christmas were better, but these were still the highlight of the evening. Mmm! Again! Watch me demolish the puff pastry almond milk goodness! 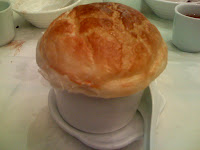 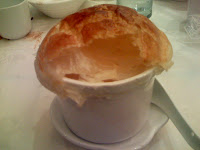 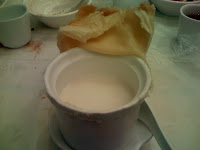 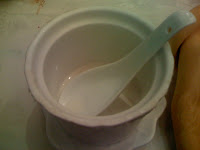 Grandma Monkey was nicer to me tonight. There was no mention of my being fat. In fact, she and my mom both commented that I have beautiful skin and teeth. Random. But I'll take what few compliments I can get. They only happen once every several years. Compliments are like the Olympics in the Monkey family.

I was so happy that I asked Brother Monkey to get a shot of the three of us with my iPhone. He took two. Can you believe my mom is 55? 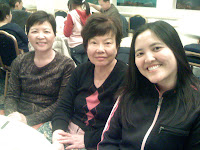 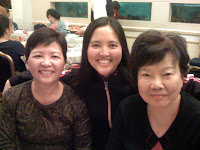 I definitely look like my dad.
Bananas Unpeeled by weezermonkey at 11:59 PM