REMINDER: Blog Party #3 is being planned! Join the fun!

Sometimes I wonder what Christmas is like in households that go all out. I'm sure it's a really special time. Not for us. The Monkeys did not exchange gifts with each other. Today was just a day off in the middle of the week.

We saw I Am Legend and Juno on the big screen. The first was simultaneously suspenseful and oddly predictable, yet fairly enjoyable. It's a zombie flick after all, and it has Will Smith. I'm not going to rave about I Am Legend, but at least I didn't feel cheated out of my money.

You might hate me for this, but Juno is overrated. The banter is over-the-top (and not in a good way), and you can tell that writer Diablo Cody thinks she's a lot more clever than she really is. Ellen Page is absolutely charming as the title protagonist, but the dialogue of the film is simply ridiculous and unbelievable, and that's not Miss Page's fault. (I'm looking at you, Ms. Cody. Boo!)

[UPDATED: In response to Nanette's comment, we didn't hear about Brother Monkey's friends' opinions until dinner, a few hours after my mixed feelings. Learning this actually made me feel good and vindicated. I thought maybe I was crazy until I discovered others didn't like it, too. I really did want to love Juno.]

I can't say that I feel as strongly as Brother Monkey's snobby industry friends, but I can say that Juno really isn't that compelling. The cast is very good, and Ellen Page deserves all the accolades she's been getting, but the film itself is lacking and extraordinarily annoying at times.

It's hard to explain. Notwithstanding the great performances by the amazing cast, the movie is just...meh. I laughed here and there, and I love Michael Cera regardless, but other times I wanted to throw things at the screen.

I didn't hate Juno, but I was a bit disappointed by it, perhaps because so many people had told me the movie was "sooooo [me]" and that I would "love it." I didn't. Hmph.

I hope the movies we borrowed from Brother Monkey are better. (He and Torry just got back from Costa Rica today and are heading up to the Bay Area tomorrow to visit her family, so we're benefiting from their absence.) 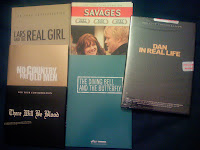 Yes, even during the strike, writers still get screener copies, and generous Brother Monkey always lets his big sis borrow his DVDs. Woohoo! Brother Monkey said that Juno actually came in the mail today, which sort of bummed me out because I could've watched the stinker in the comfort of my own home, and Mr. Monkey could've simply left the room.

Torry had the dubious honor of spending her first "Christmas" with the Monkeys tonight. Like many non-Christian folk, we went to a Chinese restaurant, Hong Kong Palace (19101 Colima Rd., Rowland Heights) to be exact.

The food was decent, nothing particularly special, but certainly not bad by any means. It was good enough. I liked it more than, say, Juno. 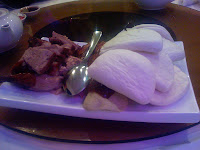 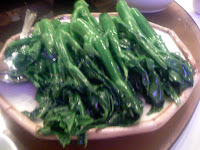 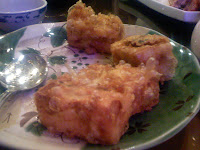 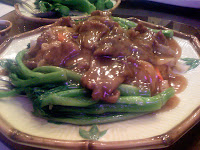 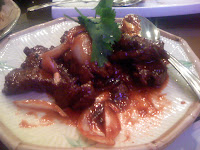 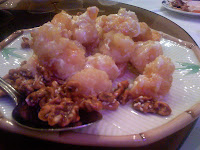 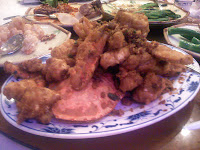 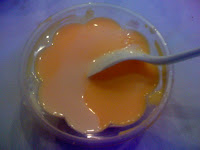 What was really impressive was the dessert, which we had to order at least 20 minutes ahead of time, not unlike the way you must anticipate your chocolate souffles at Western restaurants. The rough English translation is "crispy skin almond tea," but that's not such a great description. Take a look for yourself. 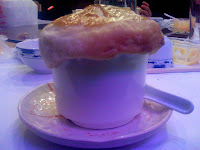 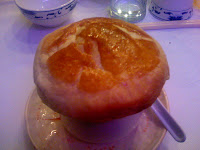 I found the shape of this dessert reminiscent of the little mushroom structures that housed the Smurfs. The "roof" is a buttery, flaky, warm puff pastry. So good on its own! But don't stop there. Open the roof to reveal piping hot almond milk inside! 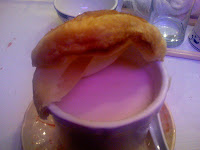 Even better! I think the hot almond milk is soy-based, rather than being dairy, but I'm not 100% positive. Whatever it was, it was awesomely delicious. I could tell that Torry really liked dunking her puff pastry into the hot almond milk. For some reason, that made me happy.

Everyone agreed this was one of the best things they'd ever tasted. No wonder Mama Monkey was so excited to order it right when we placed our regular meal order! I would definitely go back to Hong Kong Palace just for this dessert. I think I'd just eat two of these babies and call it a night.
Bananas Unpeeled by weezermonkey at 11:19 PM