First up, Superbad. I haven't laughed this hard by myself in a long time. The deleted scenes and extras were great, too. This is easily my fave Judd Apatow flick. Both The 40-Year-Old Virgin and Knocked Up were too sappy for me. Yes, I thought they were sappy. And Talladega Nights: The Ballad of Ricky Bobby? Just stupid. Sorry. Downright dumb.

Superbad was so fabulous because the banter was no-holds-barred, yet still believable, and everyone was so perfectly cast. Two big thumbs up.

Keri Russell did an impressive job. I can't see her without thinking Felicity. Felicity made a terrific pie-making waitress. The tragedy of director/writer/actress Adrienne Shelly is so sad. This may be part of the reason I ended up liking Waitress so much. Her death made the movie all the more poignant, as it was an ode to her daughter. I even got a bit teary-eyed. I rate Waitress about 7.5ish out of 10.

Finally, Pirates of the Caribbean: At World's End. So stupid! Not entertaining. Not smart. Not remotely coherent. Even Johnny Depp couldn't save this mess. And I hate Keira Knightley. I wanted to smack her pretty face. The only redeeming thing in the movie was the monkey. It was one talented monkey! Two thumbs down. Way down in the depths of the sea.

Aside from laundry and movies, I also scored two tickets to Night Two of KROQ's Almost Acoustic Christmas today. I'm a Ticket Master! Har har har. We hadn't planned on going originally because we've seen all but three of the acts before, but Mr. Monkey thought there was no harm in trying for tickets. We could always sell them after all. 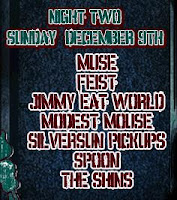 Well, now that I have them, I'm going, damn it! I haven't seen Feist or Silversun Pickups live, so that's exciting. Mr. Monkey is interested in seeing Spoon live for the first time, too.

Of course, the other bands we've seen before aren't exactly chopped liver either. Should be a good time...the night before I start my new job!